Electric Field due to a Point Charge

Electric field due to a point charge

Consider a point charge Q at the origin O, which is placed in a vacuum. Coulomb’s law states that if another point charge q is placed at a position P where OP = r, the charge Q will exert a force on q. The charge Q generates an electric field that extends throughout the environment. When a new charge, q, is introduced at point P, the field there acts on it and generates a force. The electric field produced by a charge Q at a location r can be expressed as,

where  r = r/r is a unit vector from the origin to the point r. As a result, the above expression specifies the electric field value for each value of the position vector r. The term “field” refers to how some distributed quantity (which could be a scalar or a vector) varies with position. The electric field’s existence has been combined with the charge’s effect. The force F exerted by a charge Q on a charge q is calculated as 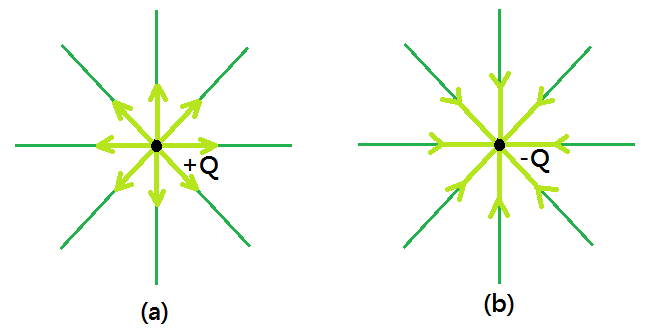 It’s worth noting that the charge q has an equal and opposing force on the charge Q.

The SI unit of the electric field as N/C.

Here are a few key points to consider:

Electric field due to a system of charges 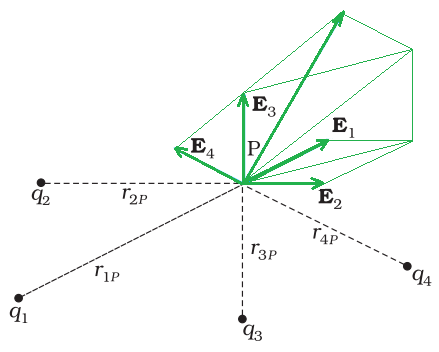 Electric field E1 at r due to q1 at r1 can be written as,

is a unit vector in the direction from q1 to P, and r1P is the distance between q1 and P.

Similarly, electric field E2 at r due to q2 at r2 can be expressed as,

is a unit vector in the direction from q2 to P and r2P is the distance between q2 and P. Similar expressions for fields E3 , E4, …, En due to charges q3 , q4 , …, qn . By the superposition principle, the electric field E at r due to the system of charges can be expressed as,

E is a vector variable that varies from one location in space to another and is determined by the source charge positions.

Physical significance of the electric field

The concept of the electric field is useful in electrostatics, but it isn’t absolutely necessary. An elegant approach to describing the electrical environment of a system of charges is to use the term electric field.

However, when we move beyond electrostatics and consider time-dependent electromagnetic events, the actual physical relevance of the concept of electric field appears. Consider the force between two distant charges in accelerated motion, q1, and q2. The speed at which a signal or information may travel from one location to another is now equal to c, the speed of light. As a result, any motion of q1, on q2 cannot have an instantaneous effect. Between the effect (force on q2) and the cause (motion of q1), there will be a temporal delay. The concept of electric field (strictly, electromagnetic field) is intuitive and extremely useful in this context. The field image is as follows: the accelerated motion of charge q1 generates electromagnetic waves, which propagate at c, reach q2, and exert a force on q2. The time delay is elegantly explained by the concept of field. Despite the fact that electric and magnetic fields can only be identified by their effects (forces) on charges, they are considered physical things rather than mathematical abstractions. They have their own dynamics, i.e., they evolve according to their own set of rules. They are also capable of transporting energy. Thus, a source of time-dependent electromagnetic fields that are turned on for a short time and then turned off leaves propagating electromagnetic fields that transport energy behind. Faraday was the first to establish the concept of field, and it is today one of the most important concepts in physics.

Problem 1: Two particles with charges +4 μC and -9 μC are kept fixed at a separation of 20 cm from each other. Locate the point at which the resultant electric field due to the system of two point charges is zero.

Assume that the electric field at point P is zero. The point P is at a distance of x from the +4C charge. The field vanishes at point P, hence the magnitudes of the separate fields produced by the two point charges at P must be equal (and directions anti-parallel). 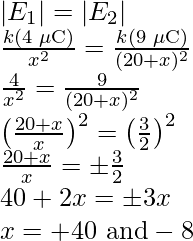 Because there is no chance of a null point in the region between the two charges, the negative value of x should be ignored. As a result, the electric field’s zero point is located on the line connecting the two point charges, 40 cm to the left of the positively charged particle.

Electric field intensity vector due to a point charge q at a position r can be expressed as,

The position vector of the point of calculation of the electric field with regard to the location point of the source point charge is r, and the proper sign is q. 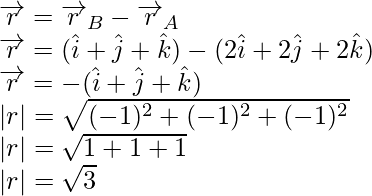 Therefore, electric field at point B is

Substitute the value in the above formula,

The expression for the electrostatic force between the spheres can be written as,

Substitute the value in the above formula,

Problem 4: Explain the meaning of the statement ‘electric charge of a body is quantized’.

A body’s electric charge is quantized. This means that only an integral number of electrons (1, 2,…, n) can be transported from one substance to another. The transfer of charges is not fractional. As a result, a body can only have total charge in integral multiples of electric charge.

Problem 5: When a glass rod is rubbed with a silk cloth, charges appear on both. A similar phenomenon is observed with many other pairs of bodies. Explain how this observation is consistent with the law of conservation of charge.

Because charges are formed in pairs, rubbing produces charges of equal magnitude but opposing nature on the two bodies. Charging by friction is the name for this type of charging. The system of two rubbed bodies has a net charge of zero. This is due to the fact that equal amounts of opposite charges cancel each other out. When rubbing a silk cloth over a glass rod, opposite natured charges develop on both bodies. These phenomena are in accordance with the law of energy conservation. Many other pairs of bodies exhibit a similar phenomena.