A direction in space is defined by the line joining the two charges. The direction from –q to q is commonly referred to as the dipole’s direction. The center of the dipole is the location of the middle point of –q and q.

The electric dipole’s overall charge is definitely zero. This does not imply that the electric dipole’s field is zero. Because the charges q and –q are separated by a certain distance, the electric fields produced by them do not exactly cancel out when put together. The fields attributable to q and –q almost cancel out over distances much greater than the spacing of the two charges producing a dipole (r >> 2a). As a result, the electric field produced by a dipole decays faster than 1/r2 (the dependence of the field due to a single charge q on r).

These qualitative ideas are borne out by the explicit calculation as follows:

Coulomb’s law and the superposition principle may be used to calculate the electric field of a pair of charges (–q and q) at any point in space. For the following two scenarios, the results are simple and clear,

The electric field of a dipole at a point on the axis.

Suppose the point P be at distance r from the center of the dipole on the side of the charge q. Then  electric field E–q  due to the charge –q can be expressed as,

is the unit vector along the dipole axis that is from –q to q. Similarly, Then electric field E+q due to the charge +q can be expressed as, 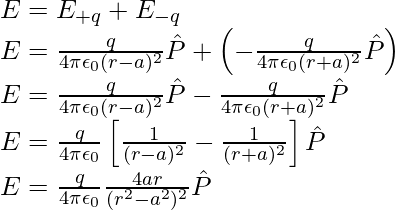 For r >> a, the above expression can be written as, 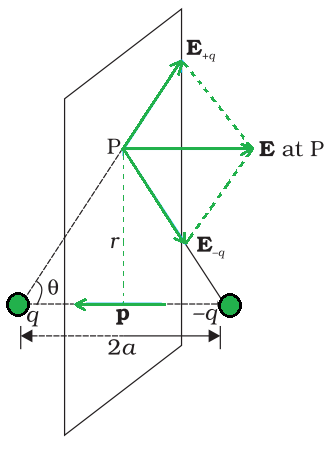 The electric field of a dipole at a point on the equatorial plane of the dipole. p is the dipole moment vector of magnitude p = q×2a and directed from –q to q.

Then, the electric field E+q due to the charge +q can be expressed as,

Similarly, then the electric field E-q due to the charge –q can be expressed as,

The above expression can be added as,

At large distances (r >> a), the above expression can be written as,

At great distances, it is evident in both cases that the dipole field does not involve q and a separately; it is dependent on the product qa. This hints at the meaning of the dipole moment. The dipole moment of an electric dipole is a vector quantity and it is symbol is p  is defined by

The electric field of a dipole at large distances (r >> a) assumes simple shapes in terms of p:

It’s worth noting that the dipole field at great distances decreases off as 1/r 3 rather than 1/r 2. Furthermore, the dipole field’s amplitude and direction are dependent not only on the distance r but also on the angle formed by the position vector r and the dipole moment p.

The centers of the positive and negative charge are located at the same location in most molecules. As a result, their dipole moment is nil. CO2 and CH4 are examples of this class of molecule. When an electric field is applied, they form a dipole moment. However, the centers of negative and positive charges may not always coincide in particular compounds. As a result, even in the absence of an electric field, they have a persistent electric dipole moment. Polar molecules are the name for these types of molecules. H2O molecules, for example, are an example of this type.

Dipole in a Uniform External Filed 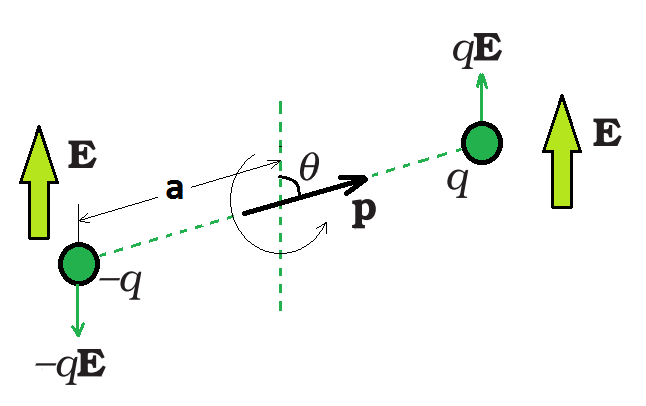 Dipole in a uniform electric field.

Suppose a permanent dipole in a uniform external field E with a dipole moment of p. On q, there is a force qE and on –q, there is a force –qE. Because E is uniform, the net force on the dipole is zero. Due to the separation of the charges, the forces operate at various places, causing a torque on the dipole. The torque (couple) is independent of the origin when the net force is zero. Its amplitude is equal to the sum of the magnitudes of the two antiparallel forces multiplied by the couple’s arm (perpendicular distance between the two antiparallel forces). The magnitude of torque can be expressed as,

The dipole will tend to align with the field E as a result of this torque. The torque is 0 when p is aligned with E.

Problem 2: In which orientation, a dipole placed in a uniform electric field is in a stable, unstable equilibrium?

Problem 3: Why are electric field lines perpendicular at a point on an equipotential surface of a conductor?

Problem 4: Given a uniform electric field, find the flux of this field through a square of side 20 cm, whose plane is parallel to the y-z plane. What would be the flux through the same square, if the plane makes an angle of 30° with the x-axis?

Problem 5: Define the term ‘electric flux’. Write it’s S.I. units. What is the flux due to electric field through a square of side 10 cm, when it is held normal too if?

The total number of lines of force moving through an area in an electric field is known as electric flux. It’s represented by the symbol ϕ. It’s a number with a scalar value. Its S.I unit is Nm2 C-1 or Vm.

It is expressed as,

The expression for the flux can be written as,

Problem 6: Why do the electric field lines not form closed loops?

Problem 7: Is the electric field due to a charge configuration with total charge zero, necessarily zero? Justify.