There existed a time when no electronic devices were available, devices like laptop, cellphones, there even was a time when humans did not have a fan to cover the heat, light in the house to see in the dark, but in today’s time, People have all these in their hands’ reach, all this was possible because of one invention — “Electricity”. Electricity is the flow of electric charges when a potential difference is available at the ends of the wire. It will not be incorrect to say that Humans mostly rely on Electricity not only for easy living, but it has become a way of life. From Rockets to Trains to Factories to our home appliances, everything works on electricity.

What is Electric Current?

The best way to imagine current flowing in a circuit is by imagining flow of liquid inside a pipe from a higher point to lower, the liquid represents current, the difference in the heights of the extreme end of the pipe represents the difference in potential causing the current to flow if the pipe is twisted at some point the flow of the liquid will slow down, that represents the resistance offered by the conductor that reduces the current.

The Unit of electric Current is Amperes (A) or Coulomb/second.

Normally, in a conductor, Electrons are present, and they are not stationary, they keep on moving in random directions, and due to their randomness, the overall displacement of all electrons becomes zero and hence, no current is produced. In order to produce current, some external force is required to align electrons in one direction and make them move in that one direction, the external force is known as Electromotive Force and is also famous as EMF. It is nothing but the voltage applied to produce current. 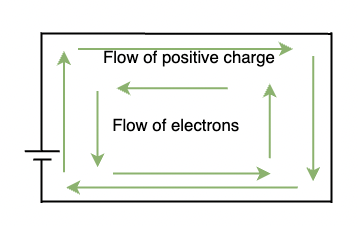 V= Voltage at the ends of conductor

R= Resistance offered by the conductor

I= Current through the wire.

There are different effects that can be noticed due to the flow of electric current in a wire, for example, when current passes through a resistor, the resistor has a property of resisting which does not let the whole current pass but since energy can neither be created nor destroyed, it is converted in heat energy and is released in the form of heat, this effect is called as the heating effect of current. Similarly, we have magnetic and chemical effects of electric current.

When Electric current is passed through a which is conducting in nature, the solution breaks in its respective ions, and effects are seen visibly. The major effects that are prominent,

When current flows in a conductor, heat energy is produced and released from the conductor and the amount of effect depends upon the resistance offered by the conductor. If the conductor has to offer high resistance, it simply means that it shall not allow most of the current to flow but due to the conservation of energy (energy can neither be created nor destroyed), current that could not pass is converted into heat and the phenomenon is known as Heating effect of current. The formula for heat energy is given by,

I= current flowing in the conductor

R= Resistance offered by the conductor

T= Time for which the current was flowing in the conductor.

Question 1: In a conductor, 10 Coulombs of charge flows for 5 seconds, determine the current produced?

The current in a circuit is given by,

Therefore, 2 amperes of current flows in the circuit.

Question 2: Answer the given questions,

1. Which material is a better conductor of electricity — Iron or Silicon?

2. What is the best conductor of electricity?

1. Iron is a better conductor of electricity while silicon is a semiconductor.

2. Silver is known to be the best conductor of electricity.

Question 3: In the circuit given below, Find the current flowing through the circuit. 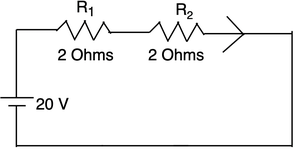 In the figure provided, it is clear that there are two resistances, and they are in series. When two or more than two resistances are attached in series in a circuit, the overall resistance becomes equal to the sum of individual resistances present in the circuit.

Question 4: Why Silver is not used more often as a conductor in daily usage?

Silver is known to be the best conductor of electricity but is still not preferred to be used in daily usage as a conductor because of its unavailability and the fact that silver is very expensive. Instead, conductors like copper which are easily available are used.

Question 5: What is the Heat energy produced when 2 amperes of current is flowing in a circuit for 5 seconds having an overall resistance in the circuit of 4 ohms?

The Heat energy produced is given by,

Therefore, 80 Joules is produced in the circuit.