The word “electricity” comes from the Greek word “Elektron” which means “amber“. The magnetic and electric forces present in materials, atoms, and molecules affect their properties. The term “electric charge” refers to just two types of entities. An experiment revealed two forms of electrification: first, the like charges that repel one another, and other is unlike charges that attract one another. The polarity of charge is the distinguishing element between these two sorts of charges.

An electric charge creates an electric field, which is a region of space around an electrically charged particle or object where the charge feels forced. The electric field exists everywhere in space and can be studied by introducing another charge into it.

If the charges are far enough apart, the electric field can be approximated as 0 for practical purposes. Electric fields are a vector quantity represented by arrows pointing toward or away from charges. The lines must point radially outward, away from a positive charge, or radially inward, toward a negative charge.

The electric field’s magnitude is calculated using the formula:

The force that exists between two point charges is described by Coulomb’s Law. In physics, the phrase point charge refers to the fact that linearly charged objects have a small size in contrast to the distance between them. As a result, we treat them as point charges since calculating the attraction/repulsion force between them is straightforward. 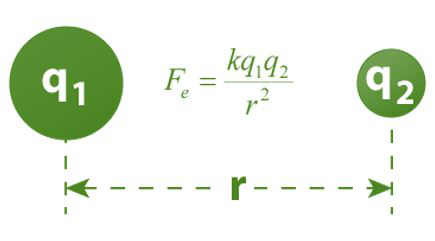 Let’s put the two together as follows:

Now, if we remove proportionality a constant k is introduced;

where k is the proportionality constant and equals 1/40, and 0 is the epsilon not, which denotes the vacuum permittivity. k has been calculated to be 9 × 109 Nm2/ C2.

The electric flux is the total number of electric field lines moving through a particular area in a given amount of time. However, unlike in the instance of liquid flow, there is no flow of a physically observable amount.

To begin with, the definition of electric flux through an area element S is as follows:

The amount of field lines cutting the area element determines this. The angle, in this case, is the angle formed by E and S. In a closed surface, when the convention has previously been established, is the angle formed by E and the area element’s outward normal. To determine the overall flux through a given surface, divide it into small area elements, compute the flux at each element, then add them together. As a result, the total flow through a surface S equals E.S. Because the electric field E is assumed to be constant over the small area element, the approximation symbol is employed.

Electric Dipole: It consists of a pair of equal or opposite charges A and -B separated by 2x. The dipole moment vector has a magnitude of 2Ax and points from -B to A in the direction of the dipole axis.

Problem 1: A charge of 2 C is placed in the center of an 8 cm3 cube. What is the magnitude of the electric flux traveling through one of the faces?

Because the given cube’s volume is 8 cm3, its side length is 2 cm.

Electric flux over a closed surface is contained charge within the closed surface divided by the medium’s permittivity, according to Gauss’s theorem.

If the medium within the cube is air or vacuum, the total electric flux over the closed surface is

There will be two tangents and consequently two directions of net electric field at the point where the two lines join, which is not possible. As a result, two electric field lines do not cross.

Problem 3: A force of 8 N is experienced when two point charges separated by 1 m have equal charges. What force will they feel if they are both submerged in water at the same time? (Assuming K water = 80)

where Ep denotes the field produced by dielectric polarisation.

The formula to calculate electrostatic force between the charges is:

Hence, the distance between the two charges, r is 0.103m.