You’ve undoubtedly heard of the idea of elasticity by now. In layman’s words, it indicates that after being stretched, some substances return to their former form. You’ve experimented with a slingshot. Didn’t you? That is an elastic substance. Let us go into the ideas of elasticity and plasticity to discover more about these two properties of matter.

The action or process of deforming or distorting is referred to as deformation. When you apply a force to an item, it will either compress or stretch in reaction to the force. The force exerted to a unit area is referred to as stress in mechanics. Strain is the amount of stretching or compressing that occurs as a result of a stress reaction. Every material reacts to stress differently.

The reaction is strongly reliant on the substance’s chemical bond type. Based on what happens once the stress is removed, deformations might be elastic or plastic described as:

When deformation forces are removed, a body’s property allows it to restore its previous size and shape, that property is known as Elasticity. Elasticity is a phenomenon that occurs at the molecular level.

When stress is given to a substance, chemical linkages should expand or flex to meet this need. Chemical bond stretching and bending should be only transient. However, atoms do not collide during stretching or bending. However, the elastic quality of material degrades over time, and the substance can become brittle and lose its ductility.

Elastomers such as vulcanised rubber are the greatest examples of elastic bodies. Vulcanized rubber has a polymer structure that is cross-linked. Sulfur bridges exist between polymer chains. These Sulphur cross-links improve rubber flexibility by allowing it to endure stress. 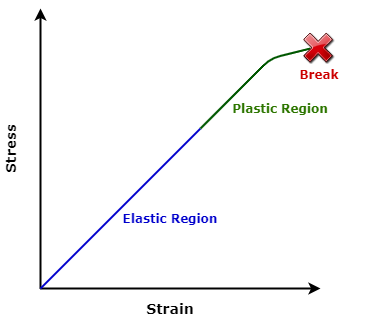 Stress-Strain curve for a ductile material

The ability of a body to lose its elasticity and develop a permanent deformation when a deforming force is removed is known as Plasticity.

Difference between Elasticity and Plasticity

Elastic fatigue is a condition in which the elasticity of a material is temporarily lost as a result of continual strain.

The effect of elastic fatigue are:

Elastic after effect refers to the time it takes for a material to restore its previous length after a deforming force is removed.

Problem 3: What happens when force is applied to a body?

Problem 4: What is a Plastic substance? Also, mention its characteristics.

A plastic substance is one that does not exhibit elastic behavior. Putty, chewing gum, lead solder, and wax are some of the examples.

Some of the main characteristic properties of a plastic substance are:

Problem 5: What is an Elastic body? Give its examples also.

The term “elastic body” refers to a body that exhibits elasticity. Steel and rubber are the two examples.

Some of the approximate examples of a perfectly elastic body are Quartz and phosphor bronze.

Problem 6: A heavy mass is attached to a thin wire and is whirled in a vertical circle. The wire is most likely to break at which point?

When heavy mass is attached to a thin wire and is whirled in a vertical circle, the wire will break at lowest point of a vertical wire because tension is more at that point.