The Dummy Regressor is a kind of Regressor that gives prediction based on simple strategies without paying any attention to the input Data. As similar to Dummy Classifier the sklearn library also provides Dummy Regressor which is used to set up a baseline for comparing other existing Regressor namely  Poisson Regressor, Linear Regression, Ridge Regression and many more. However, in this article, the main focus will be to draw a comparison between Dummy Regression and Linear regression.

In this case, however, the “mean” and “median” has been used for strategy. But the other two can be used depending upon the necessity.

OBSERVATION: As can be seen from the above result. The expected Dummy Regressor always predict the r2_ score as 0 for both the mean and median, since it is always predicting a constant without having an insight of the output. ( In general, best r2_score is 1 and Constant r2_score is 0). The Linear Regression Model seems to fit a little better than the Dummy Regressor in terms of “mean squared error”, “median absolute error” and “r2_score”. 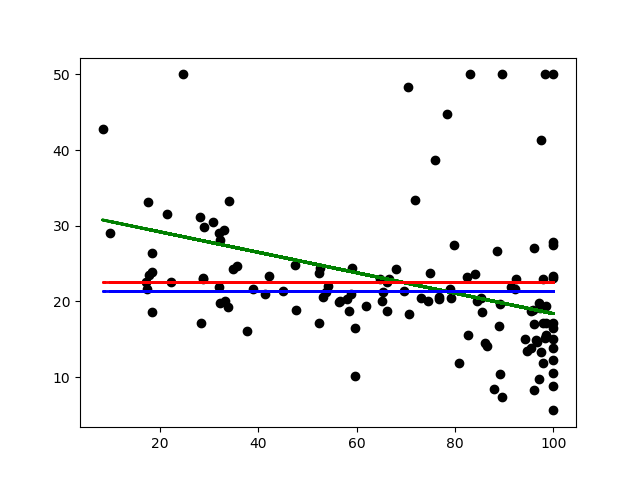 Plot of  data vs target

Conclusion- The scattered plot in the above plot, are the instances of the test set that trends to accumulate slightly at the bottom right. The green line is the linear regression model that was fit to the training points. The red line shows the dummy mean that always uses the strategy of predicting the mean of the training set, similarly the blue line shows the dummy median and serves the same purpose for predicting the median of the training set. As it is, see the linear model doesn’t fit so well to test data.

Hence, it can now be finally concluded that the Dummy Regressor can be used for checking how well a regular regression model is fitted to a particular dataset but can never be used in any real problem.

Please refer to the scikit learn documentation(“https://scikit-learn.org/stable/modules/generated/sklearn.dummy.DummyRegressor.html“) for more details.