A vector measurement of the rate and direction of motion is defined as velocity. Simply put, velocity refers to how fast something moves in one direction. Velocity may be used to calculate the speed of a car heading north on a major highway and the speed of a rocket launching into space. In this topic, let’s learn about Drift velocity.

Drift velocity is defined as “The Average velocity with which the free electrons get drifted towards the positive end of the conductor under the influence of an external electric field.” 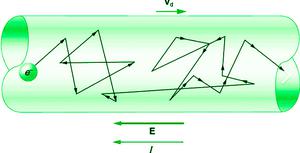 Because of collisions with other particles in the conductor, charged particles moving around in a conductor do not move in a straight line. As a result, the average particle speed in the conductor is considered. The drift velocity is the word for this.

Where, τ1 = time taken by the electron to collide with positive ion, v1 = initial velocity.

when Electric field is not applied on conductor then current result is not in metal.

Average relaxation time refers to the length each electron takes to recover from its most recent interaction with a conductor atom.

(Negative sign shows that vd is opposite to the direction of E.)

Drift Velocity Example If any three of the four quantities are known, then the missing amount can be easily calculated, as stated in the formula above for the drift velocity. As a result, the electron drift velocity in a piece of metal with a current of 0.1 A will be roughly 1 × 10-5 m/s.

The time interval between two successive collisions of electrons with the positive ions in the metallic lattice is defined as relaxation time.

Therefore, ohm’s law can be explained in terms of drift velocity as,

These quantities SI unit is m/s. It is also measured in m2/(V.s)

The magnitude of charge drift velocity per unit electric field applied is specified as the mobility of the charge carrier responsible for current.

Relation between Current and Drift velocity

Current (i) is a rate of flow of charge.

Volume of conductor = A × l

Then total charge on all the free electrons in the conductor,

Charge(Q) = Number of electron × charge of each electron

As a result of this field, the free electrons in the conductor will begin to drift to the left, as indicated in the diagram below. 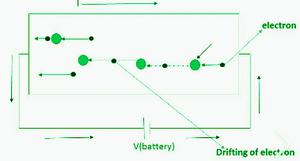 Put equation a and equation b in equation 1. Therefore, equation 1 becomes,

The average velocity gained by the free electrons of the conductor, which the electrons get drift under the influence of electric field is given as,

The current density is defined as ” The whole current supplying throughout a cross-sectional conductor unit within a unit of time.

Where, J is density of current, Area of cross-section = A, Number of electron volume = n, Drift velocity = vd , e = charge.

Therefore, the electron velocity and its current density are equivalent to each other.

Question 1: What is meant by drift velocity?

Drift velocity is defined as “The Average velocity with which the free electrons get drifted towards the positive end of the conductor under the influence of an external electric field.”

“The time interval between two successive collisions of electrons with the positive ions in the metallic lattice is defined as relaxation time.”

Question 7: When a potential difference V is applied across a conductor at a temperature T, the drift velocity of electrons is proportional to?

so for a particular conductor of a particular length the drift velocity will directly depend upon voltage. Hence, vd α V.