Have you ever experience that in just one second your entire operating system is ready to use?

Yes, you heard it right Docker gives you the facilities to use a new operating system in one second. Docker is a program that uses your base OS resources and only consumes 20MB – 50MB RAM to launch a new OS. In this article, we’ll show you how to install the docker inside Redhat Linux, how to start docker services, how to pull images from the docker hub, and finally how to launch a new container.

In this article, we will discuss the “Hello World” for Docker.

These are the steps to achieve the goal.

Let’s start with the key terminologies that you must know.

Docker container is a separate virtualized environment that is used to test, run and deploy the applications. basically, the docker container is used in application development. If any problem or bug comes then it does not affect our Base OS and it also gives extra security. we can easily create new containers with help of docker images. we can also destroy these containers easily.

Dockerfile is a scripted text file that is used to customize our container and install desire software inside the docker container. we just write the commands in Dockerfile and using this file we build our own image. Later we use this image in our container as well as we push the image on Dockerhub.

As we discuss earlier Dockerhub has the Hello-world official image so let’s see how to install docker and create containers. First of all, we configure a repo that has docker-ce software using the following command:

After the repository add you can check the repo in (/etc/yum.repos.d/) location. Now you can easily download the docker using the yum command:

Start and enable the docker services:

Use the below commands to enable and start docker respectively:

Now pull the hello-world image from docker use the below command:

Use the below command to run the hello-world file in docker:

After running the above command you see some message that prints hello-world which means your docker is successfully installed in your Centos or Redhat Linux. 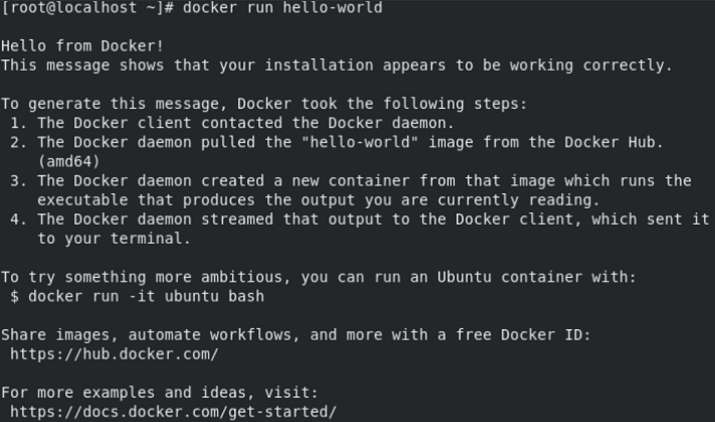 Hope you understand my explanation.Thanks for reading.