The syntax to EXPOSE the ports by specifying a protocol is:

In this article, we are going to discuss some practical examples of how to use EXPOSE instruction in your Dockerfile and overriding it using the publish flag while starting a Docker Container.

Follow the below steps to implement the EXPOSE instruction in a docker container:

Let’s create a Dockerfile with two EXPOSE Instructions, one with TCP protocol and the other with UDP protocol.

To build the Docker Image using the above Dockerfile, you can use the Docker Build command.

To verify the ports exposed, you can use the Docker inspect command. 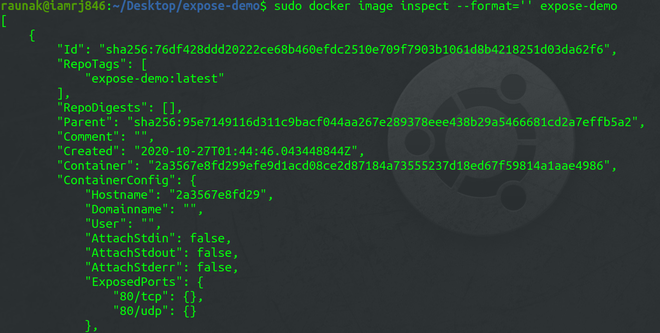 In the above screenshot, you can see the ExposedPorts object contains two exposed ports that we have specified in the Dockerfile.

To publish all the exposed ports, you can use the -p flag.

You can just the list containers to check the published ports using the following command. But make sure that the Container is running.

To conclude, in this article, we discussed how to use the EXPOSE instruction inside a Dockerfile to expose ports of a Container using a specified protocol and use -p flag to publish the ports.