The goal of this article is to show how to run multi-container applications using a single command. Compose is a tool for defining and running multi-container Docker applications. With Compose, you use a configuration file (YAML file) to configure your docker containers. Then, with a single command, you create and start all the services (containers) from your configuration. Let me explain this taking an example.

This article expects you to be familiar with docker and have some considerable experience in using it.

Let’s say we have a simple application having two components, flask app and a redis database. I will go by running the complete application with and without using docker-compose tool, which would give your major use of this compose tool.

Move to that directory

Copy it to the  requirements.txt

Create file app.py will have the code for our flask app

Copy the below code to app.py

We are simply accepting two methods GET and POST requests for `/` route. When ever a POST request is done with the name, the name is added at the end of the animals list. For GET request we will return the list of names from animals list.

Copy the below code to the dockerfile

We will start with the base image python:3.7.0-alpine3.8. We will copy the requirements.txt file and install all our flask app dependencies. Then we would copy the app.py file in to the container and finally run the flask app.

And now we ready with the docker application.

To start and use this application without compose tool would be tedious for a multi-container application as you need to remember the complete configuration and use whenever you run the application. Let’s see how it is normally without the compose tool

Now you will have a project tree as

Now will run and start our redis server container

So using that command we will pull redis:4.0.11-alpine image and run a redis container.  Now our redis has started so you should take it’s container IP address

this gives you a IP address which you need to put it to the host parameter in the app.py.

where IPAddress is the IP address you get from the redis container.

Our gfg/flask-app image is successfully built

Wait for some time and the application image will be built

Now we will start our flask app container as well.

Open a new terminal tab and run below command

Our flask app is started

So using that command we will pull the gfg/flask-app which we have built earlier and run our flask app container. Also, -p is used to map the port 5000 from container to the host.

Finally when you route to the flask app on a browser you should see something like this.

Our application is working

Now copy the below YAML code to docker-compose.yml file.

NOTE: Service names app and redis are also the hostname for the services(containers) we run because docker-compose automatically creates a network and adds our containers to that network so every container can recognize other containers by their service name as hostname within that network. So this is the reason we will keep the host parameter in the app.py file to redis itself.

–build is used to explicitly mention to build the images before starting the application.

You can see the application working as below

Our docker application is working

Using the docker-compose tool, we can make the multi-container docker application setup process much faster and easier than the usual way. 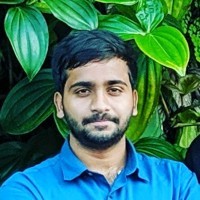