Do We Really Need to Change Our Engineering Curriculum?

These points are highlighted by most of the students for the engineering curriculum in their colleges. Now if we see another side of the table then a lot of faculties have the opinion that students are not interested in putting their efforts. According to them none of the professors in India will shoo away the students if they need some help during the class or after it. They mentioned that students don’t come for help. They also mentioned that there are fewer students who have their own idea of doing something on their own. Only fewer students reach the faculty to discuss their ideas or the subjects they are interested in. Students take interest in studies only after going out of India. They know that they have spent a lot of money and for survival, they need a job in a foreign country. Memorizing xerox notes won’t help as per their belief.

A lot of faculties mentioned the points given below:

So what would you say??

Is there something wrong with the engineering curriculum???

Is there something wrong with the engineering students???

What is Engineering and who are real engineers?

The above explanation gives a clear picture that how the definition of engineering has been changed in decades and if we ask students what kind of engineer you want to become we will get different answers. Some of them want to become like Sundar Pichai, Satya Nadella, Elon Musk, Jeff Bezos, and some other great people like that. A lot of students also want to secure a job being an employee of some good companies like Google, Amazon, Microsoft, Apple, Facebook, Dropbox, or some other great companies like that.

It is a bitter truth that a lot of students take admission in engineering (not all) not because they have an urge to solve a real-world problem or to invent, design, and build something (which is what actual engineering is according to the definition) but because of the confusion in their career path, peer pressure or because they find a secure a job in it which is quite enough to make their lifestyle comfortable (We are not saying it’s wrong).

Now the question is…

Do you really think that the 4 years of engineering curriculum can make a person like Sundar Pichai, Satya Nadella, Elon Musk, or Bill Gates??

Again before we go ahead….we recommend you to watch a beautiful message given by Sundar Pichai to students in one of his speeches at IIT Khargpur…sit, relax, watch this video carefully and observe why our engineering education system is designed in this way?.

If you carefully observe, the above video gives a lot of countless messages to everyone. Currently, Sundar Pichai is holding the position of CEO of Alphabet. How he reached this position? He explored everything on his own, and he didn’t complain about anything, he has mentioned this in his speech.

From the above scenario…again the question arises.

Is it okay to blame the education system or engineering curriculum completely??

The answer is No…it’s up to the students to decide their own career path and it’s up to them that where they want to build their careers and in what shape?

A lot of people blame the education system for the bad performance of students, poor studies, and career paths if students don’t get a job. The sad thing is a lot of people don’t analyze certain facts. We are going to give you a clear picture. Just analyze the bell curve given below… 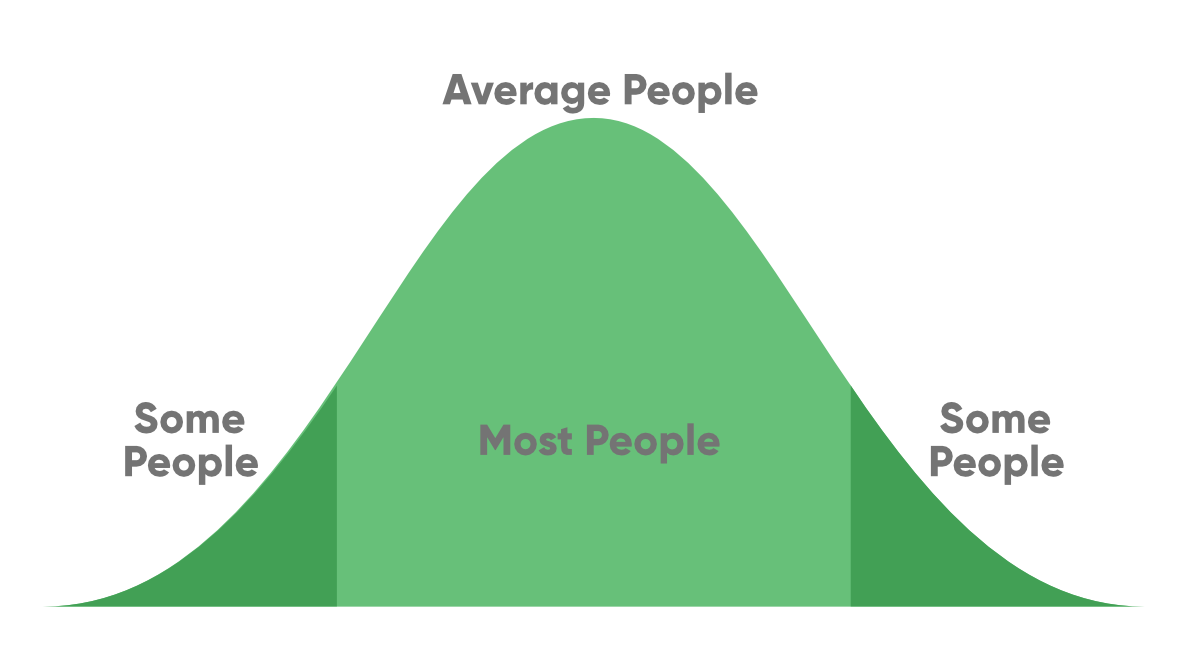 We did a clear observation from different social media, and we found that thousands of Indian engineers work in the Seattle tech industry and in Silicon Valley. We found a fact that a lot of employees are from middle-class backgrounds (lie in the middle of the bell curve). The common thing among all of them is that their parents wish to see their children in this field. India is a country with a huge population where most of the students are from middle-class families (lie in the middle of the bell curve).

Every year lakhs of students take admission in engineering. A lot of Indian parents set seemingly unrealistic expectations, they want you to take up engineering when your heart truly wanted to play the guitar. Now when the majority of student takes admission in engineering being pressurized by society, parents or peers their goal and their definition to become a successful engineer is simply mean a stable job, steady pay and comfortable life for their families. People happily credit that student for succeeding despite the system. So a country with the population and scale of India needs to optimize for quantity over quality and the education system is designed according to that focusing on this fact or truth. It is optimized to fit the need of the many. We cannot expect a system whose primary obligation is to create employable masses to focus on excellence and learning.

If you expect a system that is made highly meritocratic with updated syllabus or content along with excellent teaching methodologies (focused on learning and academic excellence) then every year we would have a few hundred world-class engineers and some great CEOs like Sundar Pichai or Satya Nadella straight out of college. The system does what it’s supposed to do. It tends to quantity over quality. The real problem in India is its size or population. So the system is designed, working, and trying to solve the problems considering the population of this country.

So is there nothing wrong with the engineering courses in India?

Yes, we agree that we need improvements, and we can make the education system better, but we can not blame the system completely. Even AICTE also released some new curriculum to create more employability (trying to make it better). Making education better is not just the responsibility of the system it should be the responsibility of each and every individual. Understand that the engineering syllabus is designed to help a student. It’s like teaching someone to swim, no matter how many hours you listen to how to swim, in the end, you have to jump in the water and do it. What we as people do is never jump and blame completely on the education system.

People are telling that the course is outdated and isn’t refreshed according to current technology. Do you really think that the outdated can be updated every month for all the latest technologies coming out every day? Yes, we agree that our syllabus doesn’t cover the hottest industry languages but it covers the basics or fundamentals and algorithms. Learning the hottest language can not teach you to build a new algorithm but deep knowledge of algorithms or fundamentals can teach you to make new languages, you can apply that knowledge and become a great engineer. Technology changes, concepts don’t. That is the reason we’re still learning the basics. We also need to understand that for campus placement companies to come, so they can take you with the skillset you have and then train you for 4–6 months to have the skills they need.

If you are a student who really wishes to go beyond the scope of what the system offers you and have the resources to do so, you can go ahead and there is nothing holding you back.  Engineering is giving you the tools to hunt, it’s up to you to learn and survive.

Last-minute preparation works but designing, modeling and producing cars take months. There is no such thing as “Last minute skill”!
-Unknown

Disclaimer: This article is completely based on the research, understanding the various points of view. The objective is not to hurt any sentiments or be biased in favor of or against the faculties, students, parents, or the education system.

My Personal Notes arrow_drop_up
Previous
Basic Prerequisites of Learning Android App Development
Next
5 Creative Ways to Improve Your English Language Skills
Recommended Articles
Page :
C Programming For Beginners - A 20 Day Curriculum!
18, Jul 20
Learn C++ Programming Step by Step - A 20 Day Curriculum!
23, Jun 22
Black Hat SEO - Is It Really Worth?
04, Feb 20
Is AI Really a Threat to Cybersecurity?
07, Apr 22
Are Robots Really Self-Learning?
20, May 21
Developers are Not Good Testers - Really?
21, Mar 22
The Hathaway Effect : Does The Anne Hathaway Effect Really True?
25, May 19
Difference between Computer Science Engineering and Computer Engineering
16, Jun 20
Saving What Saves Our Passwords – Two-Factor Authentication
07, May 18
How AI will affect our lives in next decade ?
10, Oct 18
Combining IoT and Machine Learning makes our future smarter
23, May 19
How Mobile Applications Have Made Our Lives Easier?
21, May 21
GeeksforGeeks Discord is LIVE - Join Our Ever Growing Tech Community!
19, Apr 22
Why do you need a Responsive Website
18, Dec 15
All you need to know about Network Neutrality
18, Dec 17
Do programmers need a Computer Science degree to get a job?
14, Sep 18
Need of Virtualization and its Reference Model
02, Sep 18
You don’t need to type fast to be a developer
09, Nov 18
What is the need of CMOS battery in Computers?
17, Jul 19
Everything You Need to Know About Google's Quantum Supremacy
16, Dec 19
How to choose between CMS or Framework according to the need?
31, Jan 20
5 Must-Have Skills You'll Need In Your Hackathon Team
14, Aug 20
8 Time Consuming IT Tasks You Need to Automate Now
04, Sep 20
Need of Data Structures and Algorithms for Deep Learning and Machine Learning
14, Oct 20
Article Contributed By :