An electric current passing through a conductive solution generates a chemical reaction. This may result in the production of gas bubbles on the electrodes, metal deposits on the electrodes, changes in the color of solutions, and so on. It is known what is current and how it is produced. Anything which passes the current is known as a good conductor of electricity like copper and metal and which does not pass the current is a bad conductor of electricity like wood or plastic.

Now let’s study how and why liquids conduct electricity in the present article.

What happens when a current is passed through a conducting solution?

Electric current passing through a conductive fluid causes chemical reactions. As a result, gas bubbles may form on the electrodes. Metal deposits on electrodes are possible. Color changes in solutions are possible. The response would be affected by the solution and electrodes employed. When electricity is transmitted through water that has been combined with various compounds, the contents separate into negative and positive ions. An electric current flows via these ions. The greater the number of ions, the higher the conductivity of electricity.

How does water conduct electricity?

Pure water is a bad conductor of electricity. Any impurities, similar to salts, in the water, tend to conduct electricity. At the point when salts are broken down in the water, they separate into various electrically charged particles called ions. Salt, or sodium chloride (NaCl), separates into positive Na ions and negative Cl ions. 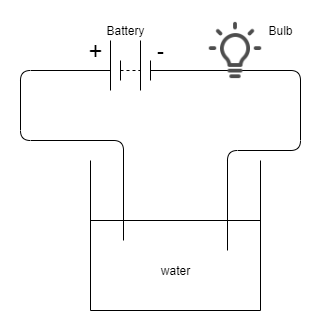 Electrolysis is known as a process of breaking down ionic mixtures into their components by passing a direct electric current through the compound in a liquid state. The cations are reduced at the cathode and anions are oxidized at the anode.

For instance, acidified or salt-containing water can be decomposed by passing electric current to their original components hydrogen and oxygen. Liquid sodium chloride can be decomposed into sodium and chlorine particles.

Simultaneously anions, surrender their additional electrons to the anode and are oxidized to neutral atoms at the anode. Electrons delivered by the anions traverse the electrical circuit and arrive at the cathode finishing the circuit. Electrolysis includes a synchronous oxidation response at the anode and a reduction process at the cathode. 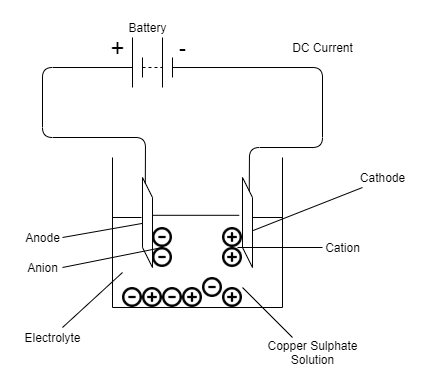 Electrodes: An electrode is solid electric conductors that convey electric flow into non-metallic solids, or liquids, or gases, or plasmas, or vacuums. Electrodes are ordinarily good electric conductors, however, they need not be metals. In an electrochemical cell, reduction and oxidation reactions occur at the electrodes. The electrode at which reduction takes place is known as the cathode. Oxidation happens at the anode.

A few times we see that a fresh new bike has sparkly handlebar and wheel edges.  Be that as it may, if these are coincidentally scratched, the sparkly covering falls off uncovering a not so sparkly surface underneath.  You may have additionally seen ladies utilizing jewelry, which have all are being made of gold. But, reusing several times, the gold covering wears off, uncovering silver or some other metal underneath.

We conclude that this material has the covering layer of other material on them. The process of coating desired or required material on any other substance with the help of electricity is known as electroplating.

Problem 1: For what reason does a compass needle when plunged in saltwater avoid more than when dunked in drinking water?

The seawater contains a tremendous measure of salts in comparison with drinking water, subsequently, the seawater is a good conductor of electricity, and it creates a more magnetic field in the wire and consequently diverts the compass needle more.

Problem 2: What are the factors affecting electroplating?

Electroplating is impacted by various components. A portion of these elements includes the electrodes’ surface area, temperature, the type of metal and electrolyte utilized, and the intensity of the applied current.

Problem 3: Does pure water conduct electricity? If not, how would we be able to deal with making it conducting?

No pure water does not conduct electricity. We can make pure water good conductor by adding salt in pure water.

Problem 4: What will you conclude about rainwater, Is it a good or bad conductor of electricity?

Water is pure water which is a bad conductor, yet it gets blended in with air particles like Sulphur dioxide and nitrogen oxides and structures acidic solution, which is a good conductor of electricity. In this way, the compass needle shows deflection.

Problem 5: Is it ok for the electrician to complete electrical fixes outside during heavy downpours? Clarify.

Problem 6: Which acid is used for electroplating?

In the electroplating and metal completing industries, methane sulphonic acids is utilized. Methane sulphonic corrosive has progressively replaced fluoroboric acid as the picked electrolyte for the electrodeposition of tin and tin-lead solder on electronic gadgets throughout the most recent ten years.