Dividing a Large file into Separate Modules in C/C++, Java and Python

If you ever wanted to write a large program or software, the most common rookie mistake is to jump in directly and try to write all the necessary code into a single program and later try to debug or extend later.

This kind of approach is doomed to fail and would usually require re-writing from scratch.

So in order to tackle this scenario, we can try to divide the problem into multiple subproblems and then try to tackle it one by one.

Doing so, not only makes our task easier but also allows us to achieve Abstraction from the high-level programmer and also promotes Re-usability of code.

If you check any Open-Source project from either GitHub or GitLab or any other site of the likes, we can see how the large program is “decentralized” into many numbers of sub-modules where each individual module contributes to a specific critical function of the program and also various members of the Open Source Community come together for contributing or maintaining such file(s) or repository.

Now, the big question lies in how to “break-down” not theoretically but PROGRAMMATICALLY.

We will see some various types of such divisions in popular languages such as C/C++, Python & Java.

Let us assume we have all the basic Linked List insertions inside one single program. Since there are many methods (functions), we cannot clutter the program by writing all the method definitions above the obligatory main function. But even if we did, there can arise the problem of ordering the methods, where one method needs to be before another and so on.

So to solve this problem, we can declare all the prototypes at the beginning of the program, followed by the main method and below it, we can define them in any particular order:

Compiling the code: We can compile the above program by:

Underlying problems in the above code:
We can already see the underlying problem(s) with the program, the code is not at all easy to work with, neither individually nor in a group.

If someone would want to work with the above program, then some of the many problems faced by that person are:

In case of group project or large programs, the above approach is guaranteed to enhance the overall expenditure, energy and failure rate.

We see these lines starting in every C/C++ program which starts with “#include ”.
This means to include all the functions declared under the “library” header (.h files) and defined possibly in library.c/cpp files.

These lines are processed by pre-processor during compilation.

We can manually try to create such a library for our own purpose.

Dividing the program into smaller codes:
Looking into the above program, we can see how this large program can be divided into suitable small parts and then easily worked on.

The above program has essentially 2 main functions:
1) Create, Insert and store data into Nodes.
2) Display the Nodes

So I can divide the program accordingly such that:
1) Main File -> Driver program, Nice Wrapper of the Insertion Modules and where we use the additional files.
2) Insert -> The Real Implementation Lies here.

Keeping the mentioned Important Points in mind, the program is divided as:

In each header file, we start with:

The reason we write our declarations in between the #ifndef, #define and #endif is to prevent multiple declarations of identifiers such as data types, variables etc. when the same header file is invoked in new file belonging to the same project.

For this Sample Program:

One very important thing to remember is that compiler can see declarations in header file but if you try to write code INVOLVING definition of the declaration declared elsewhere, it will lead to error since compiler compiles each .c file individually before the proceeding to the linking stage.

linkedlist.h -> A helper file that contains Node and it’s Display declarations that is to be included for files that uses them.

insert.c -> Include the Node declaration via #include “linkedlist.h” which contains the declaration and also all other definitions of methods declared under insert.h.

One final thing to keep in mind is that, mindless including files into each other may result in multiple re-definition(s) and result in error.

Keeping the above in mind should you carefully divide into suitable sub programs.

Finally, we save all of them and compile as follows. 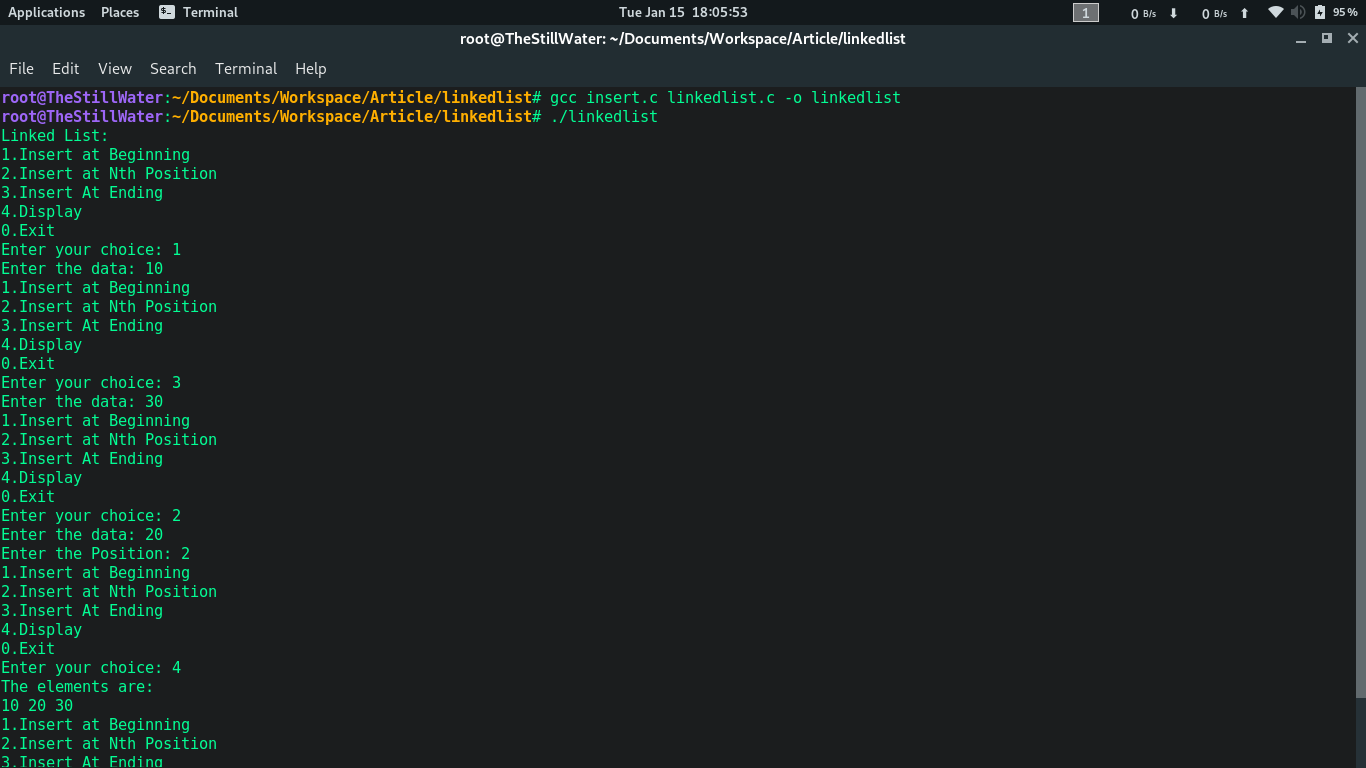 Here it is not so difficult. Usually, the first thing to do is to create a virtual environment. It is a must in order to prevent breaking of a bunch of scripts due to various version dependencies and such. For eg, You might want to use Version 1.0 of some module for one project, but this latest version deprecated a feature that is available in 0.9 and you prefer to use the old version for this new project or simply you want to upgrade libraries without breaking old and existing projects. The solution is an isolated environment for each separate project/script(s).

How to instatll Virtual Env:
Use pip or pip3 to install virtualenv if not installed already:

Setting up Isolated Environment for each project/script:
Next Navigate to some directory to store your projects and then:

Now you can use pip to install all the desired modules and they act as standalone to this isolated project and you don’t need to worry of system wide script breaking. eg: With virtual env and source activated,

One important thing to do is to create an explicit empty file named:

Example of a single cluttered File:

The weird looking ‘if __name__ == “__main__”:‘ is used to prevent execution of the code under it when imported in other modules.

We can simply abstract the Point Implementation to a separate file and use a Main File to fulfill our exact requirement.

Dividing the code into smaller parts:
The Program can be divided such that:
1) Main File -> Driver program, Create, Manipulate and use Objects.
2) Point File -> All the methods we can define using a Point in the Cartesian plane.

Helper.py -> Which consists of a Point class that contains methods such as distance and also it consists of init method which helps auto-initialize the required x and y variables.

Main.py -> Main Program that creates 2 objects and finds the distance between them. 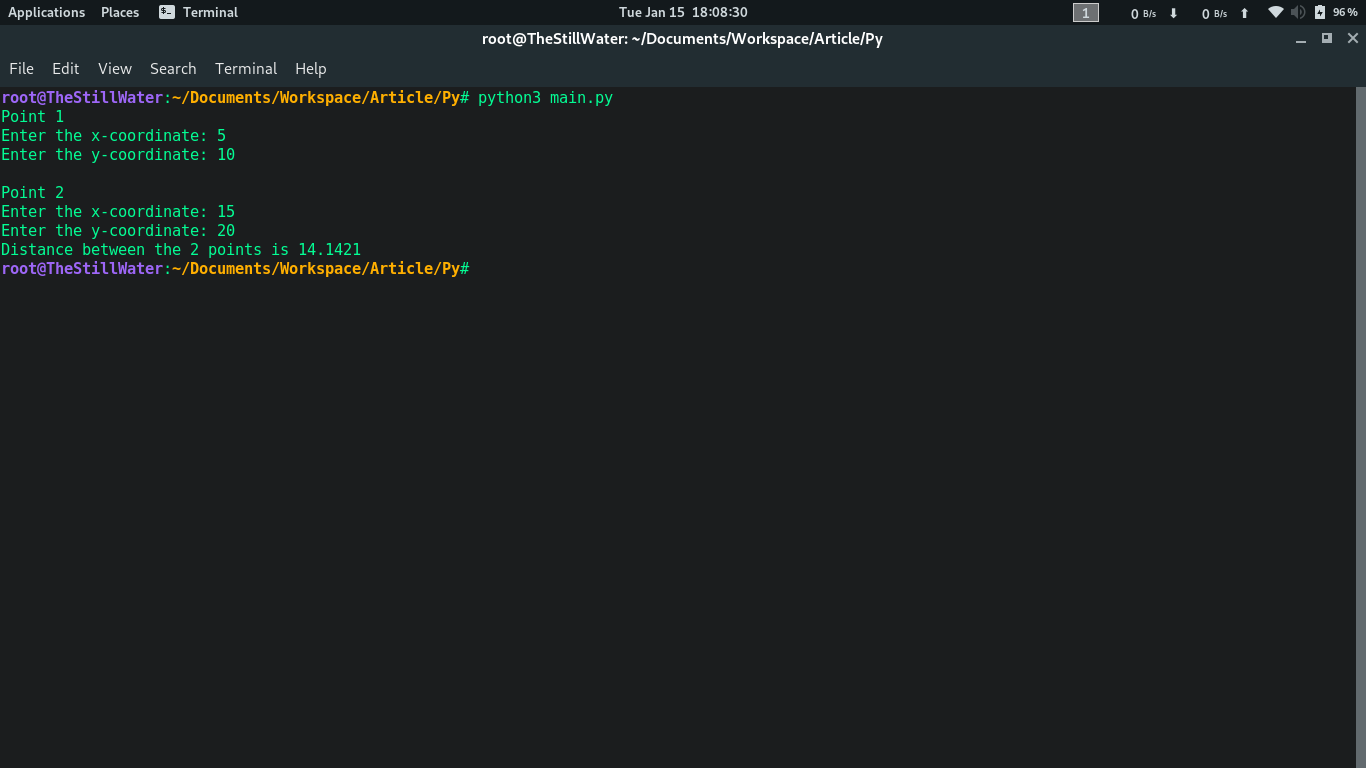 It is similar to Python. Navigate to the new directory to save the project files and in all of the sub program write:

On the starting line, and create a class as usual.
Import the module into new java program by again writing: package app_name and simply reference that particular module.function() as they belong to same package (are stored in same directory) and java implicitly adds the following lines but if you need to import new module(s) from different package(s) then do so by:

Example of a single cluttered File:

Once again there is scope of division and abstraction. We can create Multiple standalone files that deal with the numerics and here for the example, We can divide

Dividing the code into smaller parts:
The Program can be divided such that:
1) Main File -> Driver program, Write the Manipulative code here.
2) Math File -> All the methods regarding Mathematics (here Partially implemented Check Function).

Math.java -> Which belongs to foo package and a Math class that consists of method check which can only compare 2 nos. excluding inequality.

Main.java -> Main Program takes 2 numbers as input and prints the greater of 2.

Sometimes you might want to set your classpath to point to somewhere, use the:

// (or) pass the switch for both java and javac as
javac -cp /path/to/location file.java

By default it points to current directory i.e., “.”

java packagename.Main // Here in the example it is: “java foo.Main” 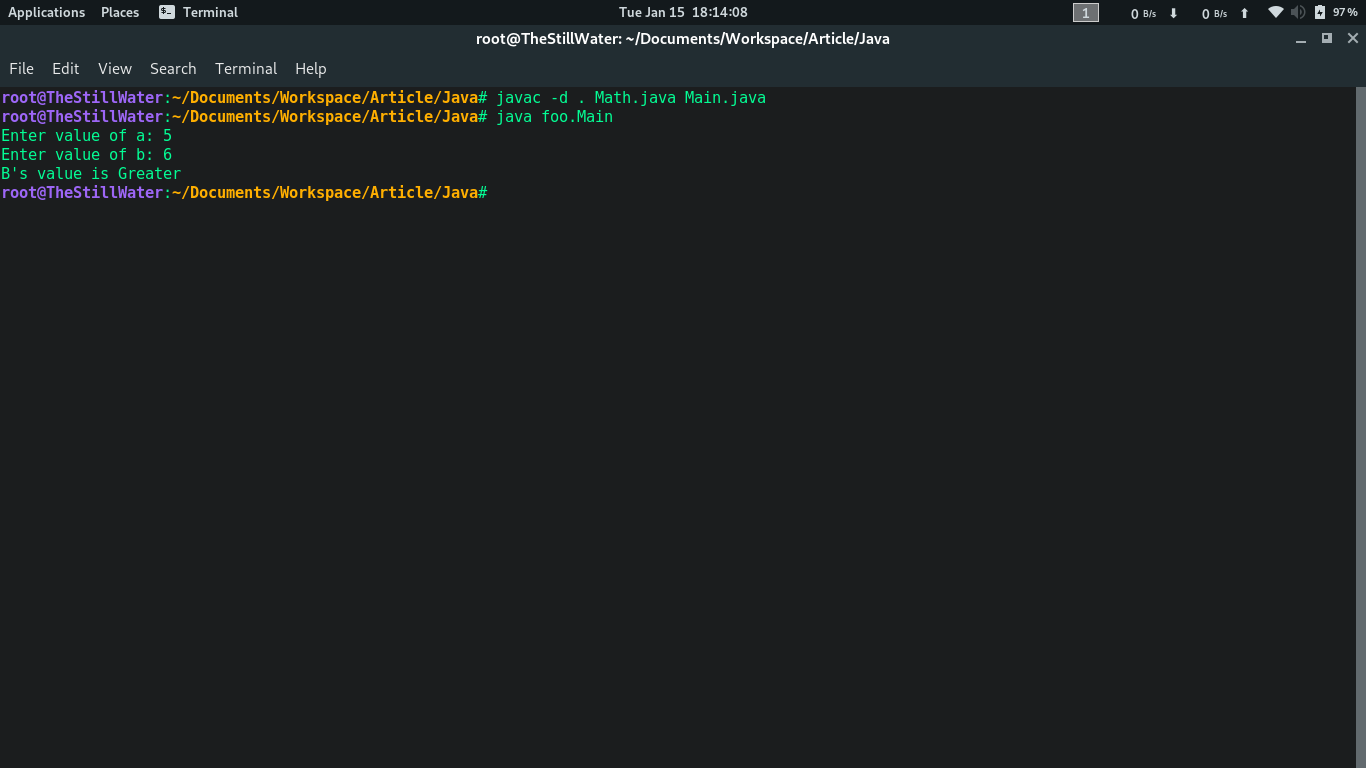 My Personal Notes arrow_drop_up
Previous
DateTime.AddYears() Method in C#
Next
Exploratory Data Analysis in Python | Set 1
Recommended Articles
Page :
Python | Split dictionary keys and values into separate lists
28, Feb 19
Java Program to Store Even & Odd Elements of an Array into Separate Arrays
07, Nov 20
Read multiple CSV files into separate DataFrames in Python
25, Mar 21
Dividing Images Into Equal Parts Using OpenCV In Python
13, Oct 21
Java Program to Read Content From One File and Write it into Another File
27, Jan 21
Python | Separate odd and even index elements
15, May 19
Python | Split and Pass list as separate parameter
02, Sep 19
Maximum sub-array sum after dividing array into sub-arrays based on the given queries
06, Feb 19
Maximum sum obtained by dividing Array into several subarrays as per given conditions
24, Jun 21
Java Program to Separate the Individual Characters from a String
02, Jan 21
Implementing our Own Hash Table with Separate Chaining in Java
08, May 16
Create and Import modules in Python
19, Dec 19
Modules available for Serialization and Deserialization in Python
22, Sep 20
Sort and separate odd and even numbers in an Array using custom comparator
23, Nov 21
Automatic Modules in Java
27, Nov 21
Python | Convert column to separate elements in list of lists
11, Mar 19
Python - Separate first word from String
30, Mar 20
Plot multiple separate graphs for same data from one Python script
14, Aug 20
Reloading modules in Python
27, Oct 16
Python | Opaque Pointers in C extension modules
26, Mar 19
10 Interesting modules in Python to play with
04, Oct 19
How to Dynamically Load Modules or Classes in Python
24, Feb 20
Which Python Modules are useful for competitive programming?
17, Apr 20
Basics Of Python Modules
08, Jul 20
Article Contributed By :