The Oscillatory Motion has a big part to play in the world of Physics. Oscillatory motions are said to be harmonic if the displacement of the oscillatory body can be expressed as a function of sine or cosine of an angle depending upon time. In Harmonic Oscillations, the limits of oscillations on either side of the mean position may or may not be the same. Simple Harmonic Motion is a special kind of harmonic motion in which the limits of oscillation on either side of the mean position are the same.

1. Displacement (x): Displacement of a body executing Simple Harmonic Motion is defined as the net distance traveled by the body from its mean or equilibrium position.

2. Amplitude (A): The maximum displacement of the body undergoing simple harmonic motion from the mean or equilibrium position is called the amplitude of oscillation.

3. Velocity (v): Velocity at any instant is defined as the rate of change of displacement with time.

For a body executing SHM, its velocity is maximum at the equilibrium position and minimum (zero) at the extreme positions where the value of displacement is maximum i.e. at x = A.  It is a vector so it is important to mention both its value and direction for a complete explanation. The velocity of the body is inversely proportional to the force acting on the body, displacement from the mean position, and acceleration of the body. Its S.I unit is m/s.

where k is the spring constant and x is the displacement from the mean position. The S.I unit of Force is N or Kg m/s2.

where m is the mass of the body and v is the velocity.

However, the Potential Energy of a body is by virtue of its position is,

where k is the spring constant and x is the displacement from the mean position. Therefore, the S.I Unit of Energy is kg m2/s2 or Joule.

In other words, it is the time taken to cover 4 times the amplitude. The S.I unit of Time Period is seconds (s).

In the case of a simple pendulum, the formula for Time Period is given by,

where T is the Time Period of oscillation, l is the length of the string or thread and g is the acceleration due to gravity.

Therefore, the S.I unit of oscillations is s-1 or Hz.

What is the Simple Harmonic Motion (SHM)?

SHM is a special kind of oscillatory motion in which the restoring force is directly proportional and opposite in direction to the displacement from the mean position. 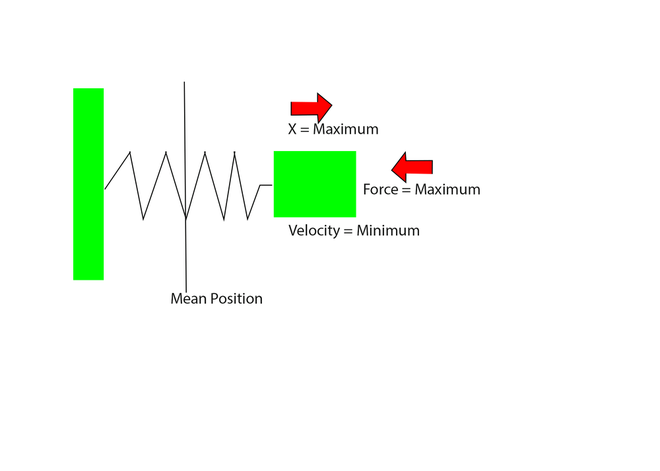 Derivation of the equation for Displacement in SHM 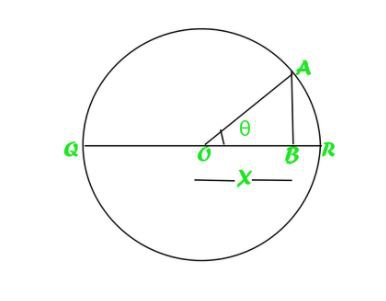 Uniform circular motion of a body

Considering the above diagram, the motion of the body along the diameter (QR) is SHM. ‘O’ is the centre of the circle and in turn the equilibrium position of the system in SHM. x is the displacement from the mean position. ‘θ’ is the angular displacement.

where AO is the radius and is equal to the maximum displacement from the mean position i.e. amplitude (A).

which is the equation of displacement from the mean position.

But since, angular displacement is the product of the angular velocity and the time taken by the particle.

where ω is angular velocity and t is the time taken by the particle.

Also, ω = 2πf where f is the frequency of the particle.

Problem 1: Considering a body executing simple harmonic motion, find the equation of the Time Period in terms of displacement.

Considering the below diagram for SHM as,

where T is Time Period.

Putting the value of Vmax in equation (1) as,

Now, k = FR / x,  FR  is the restoring force acting on the body at a displacement of x units from the mean position.

Problem 2:  Derive the equation for the instantaneous velocity of a body executing Simple Harmonic Motion.

Since, it is known that:

where k is spring constant, m is mass, x is displacement and v is the velocity.

Problem 3: Calculate the ratio of displacement to amplitude when the kinetic energy of a body is twice its potential energy.

Putting the value of v in equation (1) we get,

Problem 4: The force acting on a body under SHM is 200 N. If the Spring constant is 50 N/m. Find the displacement from the mean position.

The formula to calculate the resoring force is,

Substituting the given values in the above equation as,

where negative sign indicates that the force and the displacement are opposite in direction.

Problem 5: Derive an expression for the amount of work done or potential energy of a body executing SHM.

Since, the work done is defined as,

under SHM is not constant. Force is a function of x, FR = -kx.

The formula for work done in the case of SHM :

This is the formula for the work done or the potential energy of the mass-spring system denoted by U.