A rainbow shining against a gloomy stormy sky is a sight that everyone loves. How does sunshine shining through pure raindrops produce the rainbow of colors observed? A transparent glass prism or a diamond uses the same method to break white light into colors. There are about six colors in a rainbow—red, black, yellow, green, blue, and violet; indigo is often identified as well.

Specific wavelengths of light are correlated with certain colors. Depending on the wavelength, we expect to see only one of the six colors as we absorb pure-wavelength light. Our eye’s response to a combination of various wavelengths produces the thousands of other colors we can detect in other conditions. White light, in fact, is a combination of all visible wavelengths that are fairly uniform.

Because of the combination of wavelengths, sunlight, which is known bright, tends to be a little yellow, but it does include all visible wavelengths. The colors in rainbows are in the same order as the colors plotted against wavelength. This means the white light in a rainbow is distributed according to wavelength. This scattering of white light is known as Dispersion. More precisely, dispersion happens if a mechanism changes the direction of light in a wavelength-dependent way. Dispersion can occur with any form of wave and is often associated with wavelength-dependent processes.

What is a White Light?

What is the Visible Light Spectrum?

Visible light waves are one of the significant forms of electromagnetic waves just like X-rays, infrared radiation, UV-rays, and microwaves.   These waves can be visualized as the colors of the rainbow, with each color possessing a different wavelength. The wavelength of red is the longest, while that of violet is the smallest.

The phenomenon of splitting of visible light into its component colors is called dispersion. Dispersion of light is caused by the change of speed of light ray (resulting in angle of deviation) of each wavelength by a different amount.

The dispersion of a light wave by a prism is shown in the diagram. As white light is incident on a glass prism, the emergent light appears to be multicolored (violet, indigo, blue, green, yellow, orange and red). The light that bends the least is red, while the light that bends the most is violet. Dispersion is the process of light breaking into its constituent colors. The continuum of light is the pattern of color components in light.

When light falls on the surface it dispersed into several colors depending on the wavelength of the color or the frequency, as we know that frequency and wavelength are inversely proportional to each other. Each color has its own wavelength and frequency, so we see different colors for the same white light.

Dispersion of White Light through Prism

Causes of the Dispersion of Light

Examples of Dispersion of Light

A Rainbow is formed of seven colors (VIBGYOR) Violet, Indigo, Blue, Green, Yellow, Orange, Red. When rain happens the drops of rain falling on the surface works like a prism and when sunlight falls on the drops of water the rays of the sun scatter into different colors and form a rainbow, and sometimes we may also see multiple rainbows. In this concept drops of water, acts likes a prism and create a rainbow. Drops of water are nothing but the spherical ball containing the water and having the refractive index of water (1.333) which makes the white light to dispersed and forming a beam of light of several called rainbow.

Therefore, the necessary conditions for the formation of the rainbow are: the presence of water droplets or raindrops and the position of Sun must be at the back side of the observer of rainbow. 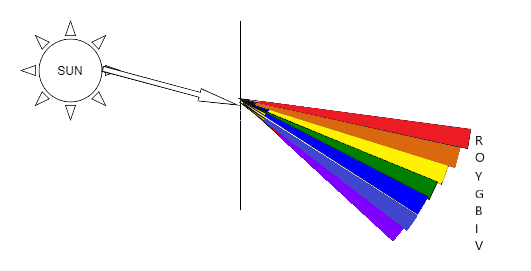 Question 1: Why a rainbow is observed after rainfalls?

When rain falls the droplets of water acts like a prism and scatter the ray of sunlight into different colors and forms a rainbow.

Question 2: Why dispersion can take place from prism but not through a glass slab?

In prism, we see a scattering of light but in the case of the glass slab we don’t see any diffraction because the glass slab works like a double prism in which light passes through directly.

Question 3: What is the direction of the sun with respect to the rainbow?

The direction of the rainbow is opposite to the sun because the lights falling on the water droplets which are acting as the sun can from the rainbow.

Question 4: Give reason why the color of sky is blue?

This is because the gases and particles present in the Earth’s atmosphere scatter sunlight in all directions. Blue light is scattered more than other colors because it travels as shorter, smaller waves. This is why we see a blue sky most of the time.

Question 5: Why the sunset is red?

Since, the red light waves are dispersed the least from ambient gas molecules within the visible spectrum of light. When sunlight takes a long way through the atmosphere to meet our eyes at dawn and sunset, the blue light has been largely lost, leaving mostly red and yellow light. As a consequence, the sunlight has an orange or red tint to it.