Dimethylglyoxime is a white powdered substance. It dissolves in methanol or sodium hydroxide solution but not in water. It was one of the earliest organic reagents to be used in analytical chemistry. It is also a very sensitive and specific reagent for the nickel element.  Many Dimethylglyoxime compounds have been produced and suggested. Although it is typically used as a nickel-specific reagent, Dimethylglyoxime may also detect other metal ions. It functions as a chelating agent, forming complexes with metals like copper, nickel, and palladium.

This colorless solid is the diacetyl dioxide derivative of the diketone butane-2,3-dione. DmgH2 can be used to analyze palladium or nickel. Its coordination complexes are theoretically interesting as enzyme and catalyst models. Many similar ligands, such as benzil, may be synthesized from different diketones.

Dimethylglyoxime has the chemical formula C4H8N2O2 and is a white powder. Dimethylglyoxime dissolves in methanol and sodium hydroxide solution. It was one of the earliest organic reagents used in analytical chemistry. 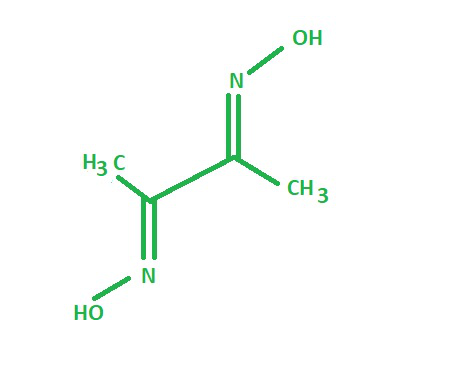 Question 1: DMG is what kind of ligand is it?

Dimethylglyoxime (dmg) is a bidentate ligand that chelates high quantities of metals. Because Ni(dmg)22 + has a square-planar shape, only two dmg molecules are required for each metal center. Add 1% dmg to the aqueous array.

Question 2: Is DMG Bidentate or not?

Dimethylglycine (dmg) is a bidentate ligand that chelates a wide range of metals. Because Ni(dmg)22 + has a square-, only two dmg molecules are required per metal center.

Question 3: What function does DMG play in analytical chemistry?

Dimethylglyoxime (DMG) is an analytical reagent that is used to precipitate Ni from its aqueous solution. The approach is quite successful in terms of selectivity and completeness for Ni recovery, although it is not widely used in industry. The failure of the reagent is blamed for the failure during calcination.

Dimethylglyoxime is widely used in analytical chemistry as a detecting reagent, precipitating reagent, and photometric reagent for various metal ions such as platinum, palladium, and nickel.

Question 5: In dimethylglyoxime, which atoms make the coordinate bonds with the nickel ion?

The dmg is a ligand with oxygen and nitrogen as donor atoms. This atom can donate an electron to the metal, resulting in the development of a coordinating complex.

Question 6: What is the usage of nickel dimethylglyoxime?

Nickel dimethylglyoxime is an insoluble salt that can be used to precipitate nickel in analytical chemistry. In the carbonyl nickel-refining process, nickel carbonyl, Ni(CO)4, a liquid at room temperature, is used.

DMG is a clear crystalline reagent that is soluble in alcohol, acetone, and ether but not in water. It has a molecular weight of 116.12 and a melting point of 238-2400° Celsius.