BlockChain is buzzword in today’s technology. Thus, a BlockChain is defined as the digital record of transaction which is stored in the Chain of Blocks.

Each time a block is completed by storing Information, the next new block is created to store further information. BlockChain is a secure technology in which third party intermediary are not allowed. For example: in money transfer banks interference are not allowed. BlockChain technology is used in various fields like Banking, Finance, Government, Insurance, Healthcare, retail etc. 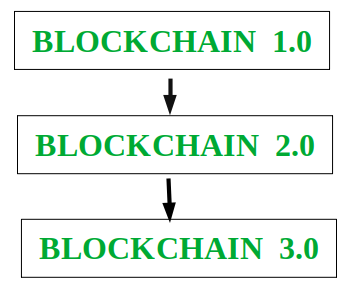 1. BlockChain 1.0 (Cryptocurrency) –
BlockChain Version 1.0 was introduced in 2005 by Hall Finley, who implements DLT (Distributed Ledger Technology) represents its first application based on Crypto currency. This allows Financial Transaction based on BlockChain technology or DTL which is executed with the help of BitCoin. This type of Version is permissionless as any participant will perform valid transaction of Bitcoin. This type is mainly used in Currency and Payments.

2. BlockChain 2.0 ( Smart Contracts) –
The new Version of BlockChain come because there is a problem in version 1.0 which was Mining of BitCoin was Wasteful and there was also lack of Scalibility of Network in it. So problem is improved in Version 2.0. In this version, the BlockChain is not just limited to Cryptocurrencies but it will extend up to Smart Contracts.

Thus, Small Contracts are Small Computer’s which live in the Chains of Blocks. These Small Computer’s are  free computer programs that executed automatically, and check the condition defined earlier like facilitation, verification or enforcement and reduce transactions cost efficiency.

In BlockChain 2.0,  BitCoin is replaced with Ethereum. Thus, BlockChain 2.0 was successfully processing high number of Transactions on Public network rapidly.

3. BlockChain 3.0 (DApps) –
After Version 2.0, new version was introduced which includes DApps which is known as Decentralized Apps. A DApp is like a conventional app, it can have frontend written in any language that makes calls to its backend, and its backend code is running on decentralized Peer-To-Peer Network. It makes use of decentralized storage and communication which can be Ethereum Swarm etc.

There are many decentralized Applications like BitMessage, BitTorrent, Tor, Popcorn, etc.