Difference between SSH and Telnet

If you have been using a linux distro for quite long time now and you are not a newbie at linux anymore then you might have come across the terms like SSH and telnet. They are pretty similar when it comes to facility they provide but did SSH come into play when Telnet already existed?

SSH or Secure SHell is now only major protocol to access the network devices and servers over the internet. SSH was developed by SSH Communications Security Ltd., it is a program to log into another computer over a network, to execute commands in a remote machine, and to move files from one machine to another.

Installation of the OpenSSH client and server applications is simpler.
To install it on your Ubuntu system, use this command at a terminal prompt:

To install the OpenSSH server application, and related support files, use this command at a terminal prompt:

And that’s pretty much it! Simple no?

Telnet is the joint abbreviation of Telecommunications and Networks and it is a networking protocol best known for UNIX platform. Telnet uses the port 23 and it was designed specifically for local area networks.

On a Ubuntu(a famous and my personal favorite linux distro.)
We can install the telnet server with following commands:

The service should be fired-up automatically once the installation is done. Your may also check the service status if required using:

To Telnet an IP:

If you would like to change its ports, you’ll need to edit /etc/services with the line:

Once changed, restart to apply the changes with:

Right now it might looking like some tedious and wacky terminal commands but if you try to run them once on your terminal, trust me you’ll find it extremely easy!
Just like SSH, Telnet is also apparently just a dull and boring terminal screen but with some unimaginable features.

Differences between SSH and Telnet

If you want to connect your Windows PC with a Linux PC then you need a software called ‘PuTTY’ which you can download from here.
After installation it’ll look a lot like this: 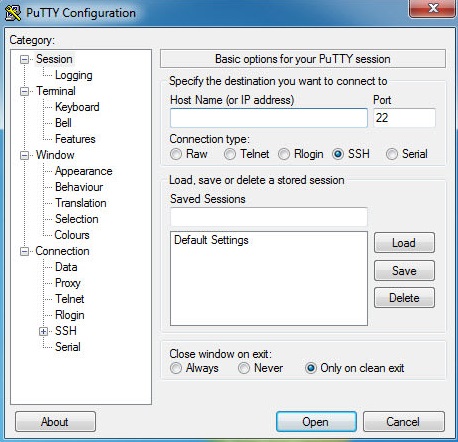