Difference Between View and ViewGroup in Android

View is a basic building block of UI (User Interface) in android. A view is a small rectangular box that responds to user inputs. Eg: EditText, Button, CheckBox, etc. ViewGroup is an invisible container of other views (child views) and other ViewGroup. Eg: LinearLayout is a ViewGroup that can contain other views in it. ViewGroup is a special kind of view that is extended from View as its base class. ViewGroup is the base class for layouts. As the name states View is singular and the group of Views is the ViewGroup. In simple terms, a view is a user interface feature that we interact with when we use an app, such as a button, editing text and images, and so on. Android.view has a child class called View. Observe While the View group is the container that houses all of these views as well as many other ViewGroup such as linear or Frame Layout. For example, if we design and use the LinearLayout as the root feature, our main layout would be the LinearLayout. Within it, we can add another view category (i.e. another LinearLayout) and several other views such as buttons or TextViews.

The View class is the base class or we can say that it is the superclass for all the GUI components in android. For example, the EditText class is used to accept the input from users in android apps, which is a subclass of View, and another example of the TextView class which is used to display text labels in Android apps is also a subclass of View.

Or the other definition,

These are some of the view subclass available in android.

The ViewGroup class is a subclass of the View class. And also it will act as a base class for layouts and layouts parameters.  The ViewGroup will provide an invisible container to hold other Views or ViewGroups and to define the layout properties. For example, Linear Layout is the ViewGroup that contains UI controls like Button, TextView, etc., and other layouts also. ViewGroup Refer to the android.view.ViewGroup class, which is the base class of some special UI classes that can contain other View objects as children. Since ViewGroup objects are also View objects, multiple ViewGroup objects and View objects can be organized into an object tree to build a complex UI structure. Following are the commonly used ViewGroup subclasses used in android applications.

The ViewGroup subclasses listed above group View instances together and takes care of their layout. For instance, the LinearLayout will render the components after each other either horizontally or vertically. 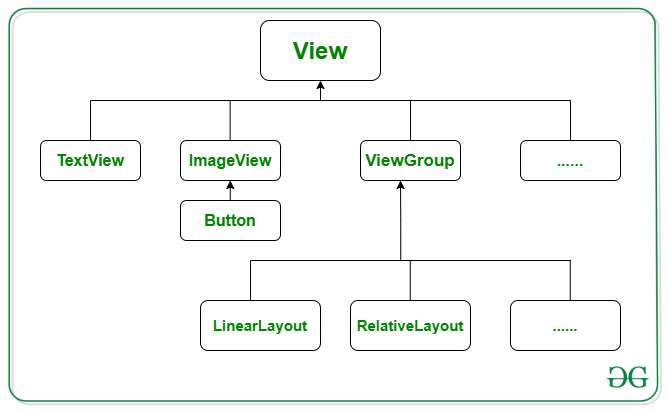 So, these all are the basic key difference between the View class and Viewgroup class in Android.