Difference between the directory, menu lists and the unordered list

While creating an unordered list, we can make use of two different types of tags. These are used to generate directory lists and menu lists.

Directory Lists: The directory list is created using the HTML <dir> tag. This tag is used as a container for lists of files/folders of a directory. With the introduction of HTML 5, the <dir> tag has become deprecated and is no longer supported.

Example: This example illustrates the <dir> tag in HTML. 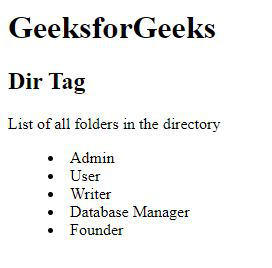 Menu Lists: Menu lists work in the same manner as the directory lists. The <menu> tag is used to create a menu list. It serves as the container for menu items and displays them in the form of a list. Refer to the link to know the difference between <nav> and <menu> for better understanding.

Example:  This example illustrates the <menu> tag in HTML 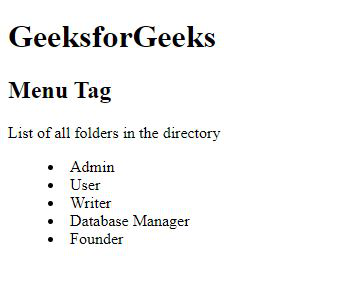 Unordered Lists: Unordered Lists are also used to create a list of items. As the name suggests there is no particular order of the items i.e. they are unordered.