A criterion for classifying a database system is the number of users who can use the system concurrently. It can be divided into single-user and multi-user database systems.

1. Single User Database Systems: In this DBMS, at one time, only a single user can access the database. Hence, the user can use all the resources at all times. All these systems are used for personal usage, such as personal computer experience. In this type of DBMS, both the physical and application layer can be used by the user.

A single central processing unit (CPU) can only execute at most one process at a time. However, multi-programming operating systems execute some commands from one process, then suspend that process and execute some commands from the next process, and so on. A process is resumed at the point where it was suspended whenever it gets its turn to use the CPU again. Hence, concurrent execution of processes is actually interleaved, as illustrated in the figure below: 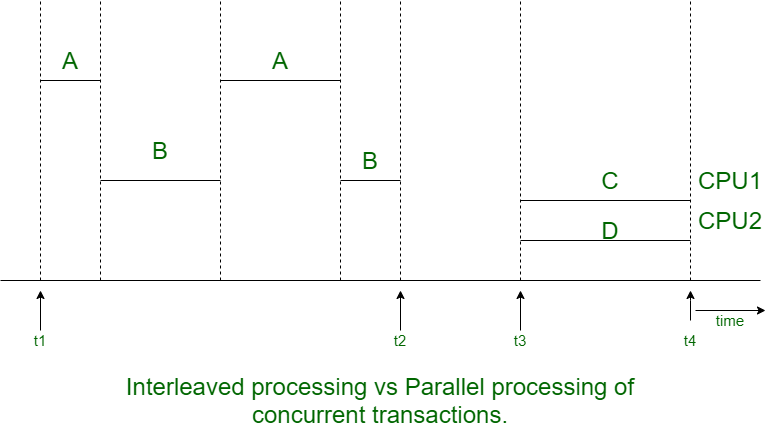 The above figure shows two processes, A and B, executing concurrently in an interleaved fashion. Interleaving keeps the CPU busy when a process requires an input or output (I/O) operation, such as reading a block from a disk. The CPU is switched to execute another process rather than remaining idle during I/O time. Interleaving also prevents a long process from delaying other processes. If the computer system has multiple hardware processors (CPUs), parallel processing of multiple processes is possible, as illustrated by processes C and D in the above figure.