1. Recursive Predictive Descent Parser :
Recursive Descent Parser is a top-down method of syntax analysis in which a set of recursive procedures is used to process input. One procedure is associated with each non-terminal of a grammar. Here we consider a simple form of recursive descent parsing called Predictive Recursive Descent Parser, in which look-ahead symbol unambiguously determines flow of control through procedure body for each non-terminal. The sequence of procedure calls during analysis of an input string implicitly defines a parse tree for input and can be used to build an explicit parse tree, if desired. In recursive descent parsing, parser may have more than one production to choose from for a single instance of input there concept of backtracking comes into play.

Back-tracking –
It means, if one derivation of a production fails, syntax analyzer restarts process using different rules of same production. This technique may process input string more than once to determine right production.Top- down parser start from root node (start symbol) and match input string against production rules to replace them (if matched).

To understand this, take following example of CFG :

For an input string – read, a top-down parser, will behave like this.

Now parser matches all input letters in an ordered manner. The string is accepted.

2. Non-Recursive Predictive Descent Parser :
A form of recursive-descent parsing that does not require any back-tracking is known as predictive parsing. It is also called as LL(1) parsing table technique since we would be building a table for string to be parsed. It has capability to predict which production is to be used to replace input string. To accomplish its tasks, predictive parser uses a look-ahead pointer, which points to next input symbols. To make parser back-tracking free, predictive parser puts some constraints on grammar and accepts only a class of grammar known as LL(k) grammar. 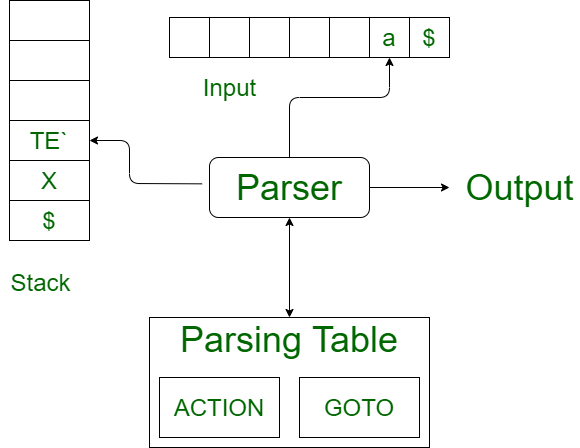 Predictive parsing uses a stack and a parsing table to parse input and generate a parse tree. Both stack and input contains an end symbol $ to denote that stack is empty and input is consumed. The parser refers to parsing table to take any decision on input and stack element combination. There might be instances where there is no production matching input string, making parsing procedure to fail.