Difference Between Modal and Persistent Bottom Sheet in Android

Android BottomSheet is a kind of view that is used as supplementary surfaces in mobile apps. This component is a part of the android design support library and is used to expose more data or information, menus, deep linked content, and in place of dialogs. It appears on the screen by sliding up from the bottom of the application screen and the user can hide it after receiving the information. One can easily notice BottomSheets in applications like Google Maps, music players, etc. In modern Android applications, BottomSheets are of two types:

Persistent BottomSheet displays the Android bottom sheet just like any other View present on the activity/fragment layout. As the name suggests, its presence is persistent i.e., it co-exists with the application main UI region. It facilitates users by displaying relevant app content and allow interaction in that region simultaneously. Developers use this BottomSheet to display menus, any kind of secondary content, or other supporting content for the application. 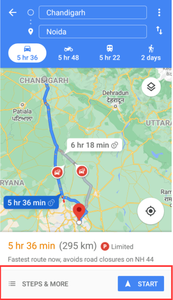 This kind of BottomSheet has an appearance similar to an alert-dialog or dialog fragment. The name has been given because of its behavior and appearance that are similar to Modals. Unlike Persistent BottomSheet, it appears from the bottom of the screen when a user requests certain actions. When activated, it shadows the activity/fragment of the main application. The sheet contents have a higher elevation than the app(16dp by default) and it includes a list of options corresponding to the action request made by the user or deep-linked content from other applications.

Modal BottomSheet in Google Drive(appears on clicking the “+” icon for adding new items into the drive): 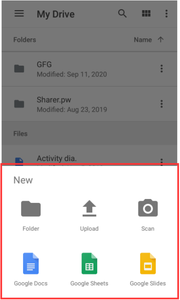