1. Finite Automata: The finite automata or finite state machine is an abstract machine that has five elements or tuples. It has a set of states and rules for moving from one state to another but it depends upon the applied input symbol. Basically, it is an abstract model of a digital computer. The following figure shows some essential features of general automation. 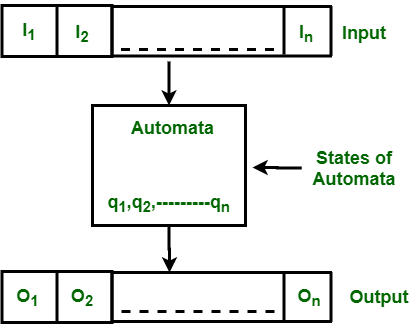 The above figure shows the following features of automata :

2. Turing Machine: It is a powerful model which was proposed by Alan Turing in 1936. The earlier models like finite automata and push-down automata are not considered accurate models because they cannot recognize the simple language. But the turing machine is the most accurate model for personal computers. A turing machine is capable of solving every problem that a real computer can do. There are also some problems which can not be solved by turing machines because these problems are beyond the theoretical limits of computation.