Difference between Decimal, Float and Double in .Net

Float :
It is a floating binary point type variable. Which means it represents a number in it’s binary form. Float is a single precision 32 bits(6-9 significant figures) data type. It is used mostly in graphic libraries because of very high demand for processing power, and also in conditions where rounding errors are not very important.

Double :
It is also a floating binary point type variable with double precision and 64 bits size(15-17 significant figures). Double are probably the most generally used data type for real values, except for financial applications and places where high accuracy is desired.

Decimal :
It is a floating decimal point type variable. Which means it represents a number using decimal numbers (0-9). It uses 128 bits(28-29 significant figures) for storing and representing data. Therefore, it has more precision than float and double. They are mostly used in financial applications because of their high precision and easy to avoid rounding errors. 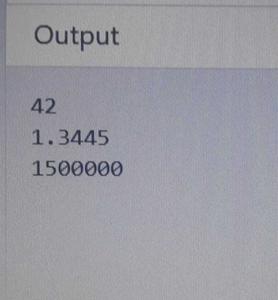 Example of double, float and decimal

Comparison between Float, Double and Decimal on the Basis of :