The response of a material to an external magnetic force is defined by its magnetic characteristics. Solids may be divided into three categories based on their magnetic properties:

What are Diamagnetic Materials?

When put in a magnetic field, diamagnetic materials are those that are freely magnetised. The magnetization, on the other hand, is in the opposite direction of the magnetic field. Diamagnetism is the term for the magnetism displayed by certain materials. 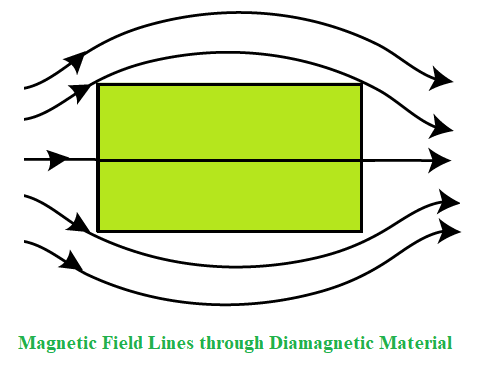 Diamagnetism exists in all materials and is temperature independent, but because the effect is so mild in contrast to paramagnetism and ferromagnetic effects, it is frequently overlooked.

Gases, liquids, and solids can all exhibit diamagnetism.

Superconductors – Superconductors are essentially diamagnetic materials with a volume susceptibility of χv = − 1(dimensionless). They exhibit complete diamagnetic screening and may be classified as perfect diamagnets since they expel all magnetic fields.

Problem 1: Why is diamagnetic susceptibility negative?

Because the electron pairs in diamagnetic materials are all together, there are no total spins. The magnetic field of these materials is directed in the opposite direction as the applied magnetic field. The diamagnetic has a low negative susceptibility, implying that it is diamagnetic.

Problem 2: Is water naturally diamagnetic? Why?

Water is diamagnetic, according to popular belief. Only the electron pairs are found in diamagnetic compounds. Water, on the other hand, includes two bonding pairs of electrons between hydrogen and oxygen atoms, as well as two lone pairs of electrons in the oxygen atom. At least one unpaired electron exists in paramagnetic compounds. When a molecule contains an odd number of electrons, something happens (like in NO). It can also happen when a few molecules have an even number of electrons (as in O2). The water repels the magnet, as we can see. This happens because any magnetic field near water produces its own magnetic field, repelling the magnet, a phenomenon known as diamagnetism.

Problem 3: What are the Diamagnetic Materials?