What is a shell?

The following image shows the simplified execution process, in which the shell receives input,
passes it to the lexical analyzer(will be discussed in detail) which will create tokens, then the output of the lexical analyzer will be passed to a parser which checks it for syntax errors and executes the assigned semantic actions(this builds the command table), and finally when the parser reaches a certain point the table will be executed.

The shell will be implemented in 3 components as shown in the architecture diagram below: 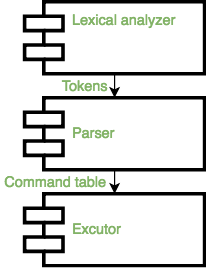 1. Lexical Analyzer
The first part in input parsing is the lexical analysis stage where the input is read character by character to form tokens, we will be using a command called lex to build our file, in this file we will define our pattern followed by the: token name the lexical analyzer will read the input character by character and when the pattern matches the string on the left it will be converted to the string on the right.
ex:

The parser will read l then s form a token called WORD then it will read – and characters (al) and form an OPTION the output will be WORD OPTION, this output will be passed to the parser to check if there is a syntax error.

2. Parser
After the tokens have been formed from the input, tokens pass as a stream to the parser which parses the input to detect syntax error and execute the assigned semantic actions. A parser can be thought of as the Grammar and syntax of the language (which defines how our commands will look like whats acceptable), we will use a command called yacc to compile the grammar, we will construct the grammar as a form of states which makes the grammar construction and deployment easier.

Below is our grammar definition:

The above grammar specifies the different states of the parsing process,

While parsing the command our parser saves the command details in our table to be passed to the executor.

We picked a table to be our data structure, we need to store the following information about each command, the Command, Option, Option2, Arguments, StdIn, StdOut, StdError.

This command will result in the following table(each row is a simple command, The table itself is a complex command).

After the command table has been built, the executor is responsible for creating a process for every command in the table and handle any redirection if needed.
The executor iterates over the table to execute every simple command and connect it to the next one at every entry in the table (simple command) the executor orders the command, option and arguments to be passed into the execvp function which replaces the current invoking process with the called one, the execvp function as a first parameter receives the name of the file to be executed and a null-terminated array containing the options (if any) followed by arguments.

The table that is built by the parser will look like this:

The executor code will iterate over this table and do the steps mentioned above and will clear everything when the command finishes, to be ready to receive the next command.

My Personal Notes arrow_drop_up
Previous
Loader in C/C++
Next
Making your own Linux Shell in C
Article Contributed By :