In this article we will learn how to recognize files by their extension, using python. We would be using the Python Magic library to provide such capabilities to our program. To install the library, execute the following command in your operating system’s command interpreter:-

For demonstration purpose, we would be using a file name apple.jpg with the following contents:- 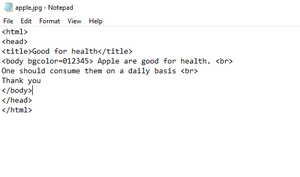 Apparent from the contents, the file is an HTML file. But since it is saved with a .jpg extension, the operating system won’t be able to recognize its actual file type. So this file would be befitting for our program.

Firstly we import the magic library.  Then we use magic.from_file() method to attain the human-readable file type. After which we use the mime=True attribute to attain the mime type of the file.

Things to consider while using the above code: