Describe the mechanism of NPM

NPM stands for Node Package Manager that is used to manage various dependencies of the node.js framework. It is a command-line tool that can be used to install, update and uninstall the node.js packages in the application. It acts as a repository for all the open-sources packages of the node.js framework. Anyone can contribute to this repository in form of new features and repairing the bugs and issues that might have occurred and needs to be handled from time to time.

NPM is automatically installed with the node.js installation as a part of the install package. You can check whether NPM is installed on your system by using the following command:

In order to check the available commands that you can perform using the NPM can be seen using the help command as follows: 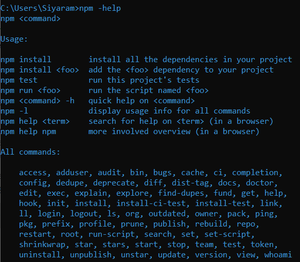 In order to install a dependency locally, we can use the install command with the <package name> which we want to install as given below:

Installing a package using NPM creates the ExpressJS folder under the node_modules in the root folder of the project and express.js will be installed inside the folder.

Installing a package globally creates a directory in user/local/lib/node_modules folder that is accessible to all the applications in the system and is not bound to any specific directory.

If a new version of a dependency is released then it can be updated using the NPM with the help  of the update command with the <package name> as given follows:

Previous
How to embed two components in one component ?
Next
How React handle or restrict Props to certain types, or require certain Props to exist ?
Related Articles
1. Difference between npm i and npm ci in Node.js
2. Difference between npm install and npm update in Node.js
3. How to solve npm error npm ERR! code ELIFECYCLE ?
4. What is the mechanism of reading the content of a file in Node.js ?
5. Explain the Mechanism of event loop in Node.js
6. Describe the use of Timer methods in Node.js
7. How to install the previous version of node.js and npm ?
8. What are the differences between npm and npx ?
9. Steps to Create and Publish NPM packages
10. How to use External Modules and NPM in a project ?
Article Contributed By :