Parallel Plate Capacitors are capacitors with electrodes and insulating material arranged in a parallel pattern (dielectric). The electrodes are the two conducting plates. Between them, there is a dielectric. For the plates, this serves as a divider.

The parallel plate capacitor’s two plates are of similar size. They are plugged into the power source. The plate, which is linked to the battery’s positive terminal, receives a positive charge. The plate linked to the negative terminal of the battery, on the other hand, receives a negative charge. Charges are trapped inside the capacitor plates as a result of the attraction. 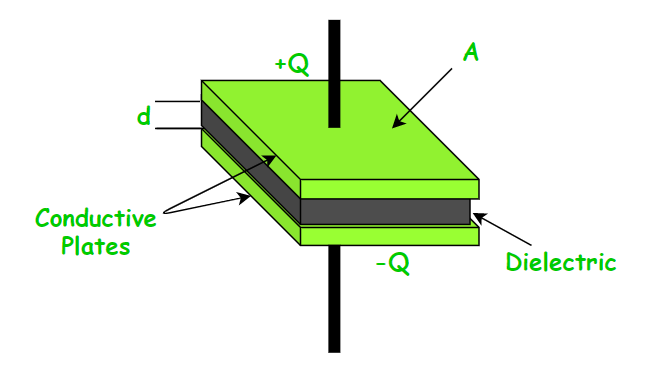 The Principle of Parallel Plate Capacitor

Dependence of Charge Stored in a Capacitor

The potential difference between the two plates of a parallel plate capacitor is exactly proportional to the amount of electric charge stored in any of the plates. This relationship may be deduced as follows:

The Capacitance of Parallel Plate Capacitor

According to Gauss Law, the electric field is given as:

The potential difference between plates is given as:

Since, the capacitance is defined as C = Q ⁄ V, so formula of capacitance can be given as:

The greatest capacitance is obtained when the plates are positioned extremely close together and the area of the plates is big.

The capacitance of a parallel plate capacitor can be increased by adding a dielectric between the plates with a permeability k higher than 1. Dielectric Constant is another name for K.

Multiple Parallel Plate Capacitor is an arrangement of parallel plate capacitors with dielectric material between them in groups that fit together. The capacitance of a capacitor with numerous parallel plates may be computed as follows:

The parallel plate capacitor formula is expressed by,

Problem 2: Determine the area of parallel plate capacitor in the air if the capacitance is 15 nF and separation between the plates is 0.02m.

The parallel plate capacitor formula is expressed by,

Problem 3: Derive the expression for capacitance of parallel plate capacitor.

Since, the capacitor is made up of parallel thin plates:

The potential difference between plates is given as:

Capacitance of a capacitor is given as:

Hence, the capacitance of parallel plate capacitor is C = ε0 A ⁄ d.

The capacitance of a capacitor is given by:

Hence, the new capacitance of capacitor is C.

Problem 5: How is the electric field between the two plates of a parallel plate capacitor?

The electric field is directed from the positive to the negative plate. The electric fields generated by the two charged plates build up in the inner area, between the two capacitor plates. As a result, the playing field is consistent throughout.

My Personal Notes arrow_drop_up
Previous
Introduction to HTML
Next
What is a Star? Formation, Life Span, Constellations
Recommended Articles
Page :
Energy stored in a Capacitor
24, Jun 21
AC Voltage Applied to a Capacitor
18, Oct 21
What is Capacitance?
17, Jul 21
Sound Needs a Medium for Propagation
26, May 21
Equations of Lines Parallel to the x-axis and y-axis
26, Mar 21
Parallel Lines and Transversals
28, Apr 21
Capacitors in Series and in Parallel
02, Aug 21
Resistors in Series and Parallel
26, Sep 21
Combination of Cells in Series and Parallel
11, Oct 21
Reverse elements of a Parallel Stream in Java
14, Nov 18
foreach() loop vs Stream foreach() vs Parallel Stream foreach()
26, Sep 19
script.aculo.us Parallel Effect
19, Nov 20
Parallel Coordinates in Matplotlib
21, Jan 21
How to run multiple npm scripts in parallel?
08, Feb 21
Python - Run same function in parallel with different parameters
03, Mar 21
How to run many parallel HTTP requests using Node.js ?
13, Apr 21
Parallel matrix-vector multiplication in NumPy
21, Sep 21
Do parallel lines meet at infinity?
24, Sep 21
Difference between ‘function declaration’ and ‘function expression' in JavaScript
20, Sep 21
Difference between function expression vs declaration in JavaScript
22, May 19
Class 8 RD Sharma Solutions - Chapter 6 Algebraic Expression and Identities - Exercise 6.4 | Set 2
04, Dec 20
Perl | Backtracking in Regular Expression
03, Jul 19
How to clone a given regular expression in JavaScript ?
19, May 21
Perl | Quantifiers in Regular Expression
31, May 19
Article Contributed By :