Definition and Classification of Energy Bands

Solids, liquids, and gases all have different arrangements of molecules. They have grouped tightly in solids such that the electrons within the molecule atoms migrate into the orbital of the adjacent atoms. The molecular arrangement in gases is not close, but it is moderate in liquids. As a result, when the atoms approach one other, the electron orbitals partially cover. The levels of energy bands are generated as a result of the merging of atoms inside materials, rather than single energy levels. An Energy band is a collection of energy levels that are tightly packed together.

What is Energy Band?

Because of this, electron energies will not be at the same level, and electron energy levels will be modified to a value that is greater or lower than the initial energy level of the electron. The energy of inner orbit electrons, on the other hand, is unaffected by the existence of nearby atoms.

The energy levels of electrons in the same orbit differ. The term “energy band” refers to the grouping of these various energy levels.

According to Bohr’s hypothesis, each atom’s shell has a different amount of energy at different levels. The major focus of this theory is on electron communication between the interior and outer shells. The energy bands are categorised into three categories according to the theory of energy bands, which include the following. 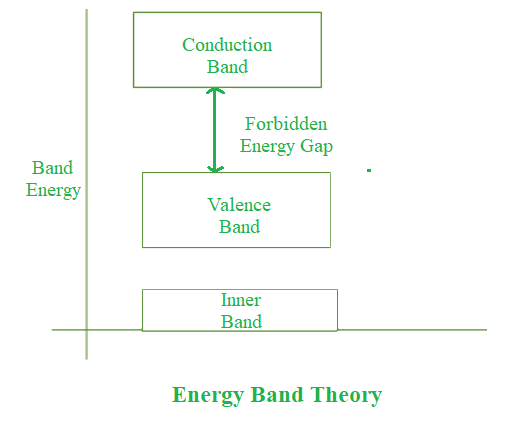 The prohibited gap is defined as the space between the conduction and valence bands. This is a band that is not allowed to exist because it lacks energy. As a result, no electrons flow in this band. This gap will allow electrons to move from the valence to the conduction state.

The electrons in the valence band are tightly linked to the nucleus if this gap is larger. At the moment, a little external force is required to push the electrons out of this band, which is comparable to the forbidden energy gap. The two bands, as well as a prohibited gap, are depicted in the diagram above. Semiconductors, conductors, and insulators are created based on the gap size.

The energy bands are divided into three categories:

Insulators are substances or materials that do not conduct electricity and do not allow it to pass through them. The prohibited energy gap in the insulators is wide enough to prevent electricity from passing through. Insulators include materials such as rubber and wood. The structure of energy bands in insulators is seen in the diagram below. 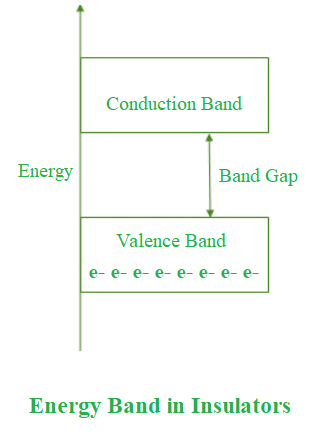 Insulators have the following characteristics:

The conductor is a kind of material in which the forbidden energy gap, such as the valence band, disappears and the conduction band becomes exceedingly near to the point where they partially overlap. Gold, Aluminum, Copper, and Gold are the greatest examples of conductors. At normal temperature, the amount of free electrons available is enormous. The conductor’s energy band diagram is given below. 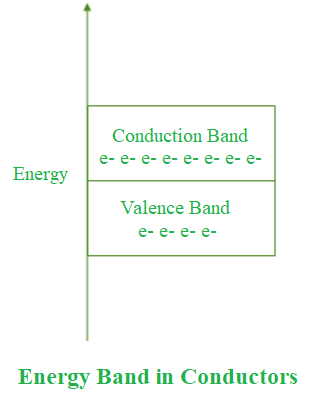 The energy gap, which is banned, is one of the most important properties of conductors. The energy bands of valence and conduction will get entangled. There are plenty of free electrons available for conduction. Once the limited number of voltages rises, the conduction will grow.

Conductors have the following characteristics:

Semiconductors have the following characteristics:

Question 1: What are the differences between conductors and insulators? Give specific instances.

Conductors: Materials with a lot of empty space are called conductors, and they allow for easy electricity conduction. Metals, for example, are silver, gold, and copper.

Insulators: Materials with a lot of immobile charge are poor current conductors. Plastic, rubber, and other similar materials are examples.

Question 2: On the basis of energy band diagrams, write any two differentiating traits between conductors, semiconductors, and insulators.

The difference between conductors, semiconductors and insulators are as follows:

Question 3: What is the energy required for a valence electron to move from the valence band to the conduction band?

To move from the valence band to the conduction band, the valence electrons must have the same energy as the energy gap.

Question 4: What is the definition of a band model?

The presence of energy bands is postulated in band theory to describe the behaviour of electrons in materials. It satisfactorily explains several physical characteristics of solids by using the band structure of the material.

Question 5: Three Ge atoms are moved closer to one another until they reach a distance equal to that between atoms in a crystal. The valence band has how many allowable energy states? What about the band of conduction? Where may valence electrons be found?

A Ge atom’s 4 valence electrons are present in the states 4s2, 4p2. When the 3 Ge atoms are brought together until they reach the distance from the Ge crystal, the 4s and 4p levels divide into two energy bands, each with 6 levels. As a result, the valence band will contain 6 energy levels, each of which may hold 2 electrons with opposing spin.

Similarly, the conduction band will contain 6 energy levels. Due to the fact that 3 Ge atoms contain a total of 12 valence electrons, all of the valence band’s potential states will be occupied.