A Stream is a sequence of asynchronous events. It is like an asynchronous Iterable—where, instead of getting the next event when you ask for it, the stream tells you that there is an event when it is ready.

In other words, streams are a source of asynchronous events delivered sequentially. There are data events, which are sometimes referred to as elements of the stream due to a stream’s similarity to a list, and there are error events, which are notifications of failure. Once all data elements have been emitted, a special event signaling the stream is done will notify any listeners that there is no more.

The primary advantage of using streams to communicate is that it keeps code loosely coupled. The owner of a stream can emit values as they become available, and it doesn’t need to know anything about who’s listening or why. Similarly, consumers of the data need only adhere to the stream interface, and the means by which the stream’s data is generated are entirely hidden.

How Streams are created?

Streams can be created in many ways: the asynchronous await for iterates over the events of a stream like the for loop iterates over an Iterable.

Explanation: This code simply receives each event of a stream of integer events, adds them up, and returns (a future of) the sum. When the loop body ends, the function is paused until the next event arrives or the stream is done.

In function, we have used the async keyword, which is required when using the await for a loop.

Important concepts of Streams in Flutter:

Stream Controller: A StreamController simplifies stream management, automatically creating a stream and sink, and providing methods for controlling a stream’s behavior. A StreamController object in Dart does exactly what the name suggests, it controls Dart Streams. The object is used to create streams and send data, errors, and done events on them. Controllers also help check a stream’s properties, such as how many subscribers it has or if it’s paused.

Stream Builders: StreamBuilder is a widget that uses stream operations and basically, it rebuilds its UI when it gets the new values that are passed via Stream it listens to.

We will create a Flutter count-down app using Stream Controller and Stream builder. In this Flutter StreamController Example, We will simply build an app that can count down a value from n to 0 using the stream Controller sink & update the UI.

There are two important points to know –

In the above code we have created StreamController & add data to it using sink.add().

We can see below this is how we used the stream controller in the above code:

Here we put the initial count to 10. So from 10, it will go in reverse order till the value gets to 0.

Single subscription streams are the default. They work well when you’re only using a particular stream on one screen.

A single subscription stream can only be listened to once. It doesn’t start generating events until it has a listener and it stops sending events when the listener stops listening, even if the source of events could still provide more data.

Single subscription streams are useful to download a file or for any single-use operation. For example, a widget can subscribe to a stream to receive updates about a value, like the progress of a download, and update its UI accordingly. 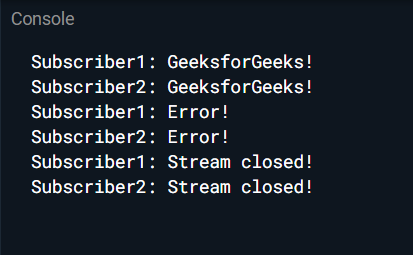 Let’s look into some of the classes’ useful methods that are used in the above programs:

Previous
Maximize the minimum difference between any element pair by selecting K elements from given Array
Next
IP address as logical address and MAC address as Physical address
Related Articles
1. How to Combine Lists in Dart?
2. Basics of Numbers in Dart
3. Dart - Super and This keyword
4. Dart - Standard Input Output
5. Dart - Unit Testing
6. Generators in Dart
7. Dart - Classes And Objects
8. Operators in Dart
9. Dart - Loops
10. Switch Case in Dart
Article Contributed By :