DarkSide is a free and open-source tool available on GitHub. This tool is free means you can download and use this tool free of cost. DarkSide is used for reconnaissance. Darkside is used for information gathering of the target. This tool is used to perform social engineering attacks. DarkSide tool is written in python language you must have python language installed into your kali Linux in order to use this tool. This tool comes with the awesome user interface. DarkSide tool comes with an awesome user interface. This tool not only used for information gathering and social engineering attacks, but it also provides different options. When the tool runs, it runs in the browser it shows different options such as hacker news, cryptocurrency ratings etc. DarkSide also contains the latest exploits. You can download that exploits and can use at free of cost. This tool is easy to use comes with lots of features of reconnaissance. 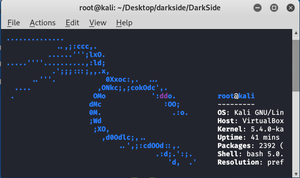 Step 1. Open your kali linux terminal and move to the desktop using the following command. 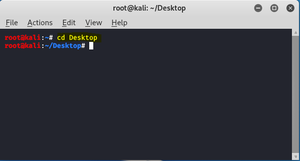 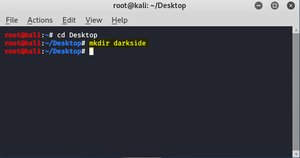 Step 3. You have created a new directory. Now move to this directory using the following command. 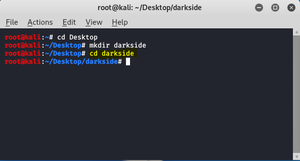 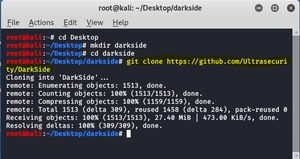 Step 5. You have cloned the tool successfully. Now to list out the contents of the tool use the following command. 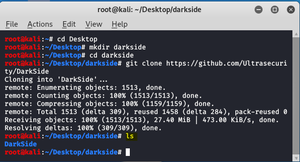 Step 6. You can see a new directory has been generated with the cloning of the tool. Now you have to move in this directory using the following command. 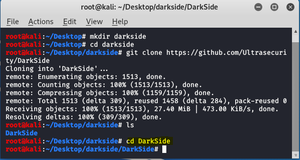 Step 7. Now you are in the directory that has been created at the time cloning of the tool.  To list out the contents of the directory using the following command. 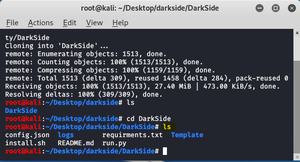 Step 8. You can see install.sh file here this is the installation file that you have to install. Use the following command to install the tool in your system. 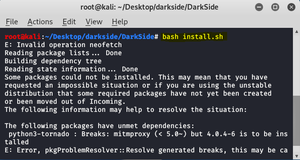 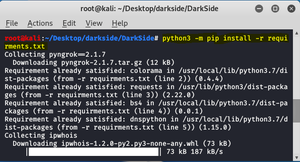 Step 10. All the requirements has been downloaded for the tool. Now you have to download Neofetch. Neofetch is a command-line system information tool that displays information about your operating system. We need to install it using the following command. 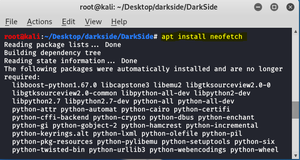 Step 12.  All is set up, and now we need to execute the following command to boot this tool. Once it boots completely it will give us the location where the tool is hosted. Open the highlighted URL on your browser. 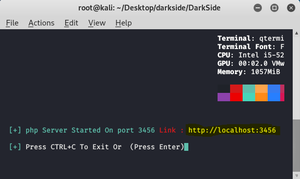 Step 13.  Use the above-highlighted link copy this link and paste it in your browser URL bar. 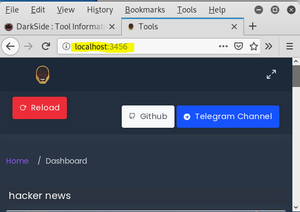 This webpage has been opened by the DarkSide tool. This webpage contains various hackers’ information such as information gathering, exploits, social engineering attacks vectors now let’s see some examples to use the tool. 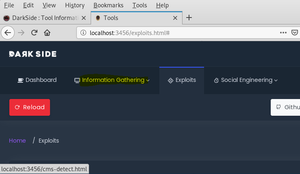 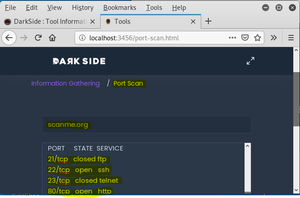 You can see how DarkSide has worked and found open and closed ports of the target website. In this example we have scanned the website scanme.org and the results are 21 FTP is closed and 22 ssh is opened this is how you can also scan any website and get information about the target.

Step 1. Go to the social engineering tab bar on the webpage. 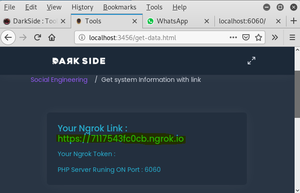 Step 2. Send this link to the victim. 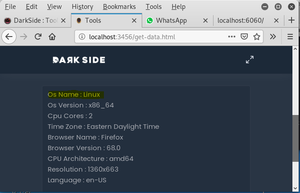