In the article, Material Design Component Navigation Rail in Android, it’s been discussed how to implement one of the navigation components that is Navigation Rail especially for the larger screens like desktops or tablets. So in this article, it’s been continued with the customization of the Navigation Rail in android. Have a look at the following image to get an overview of the entire discussion. 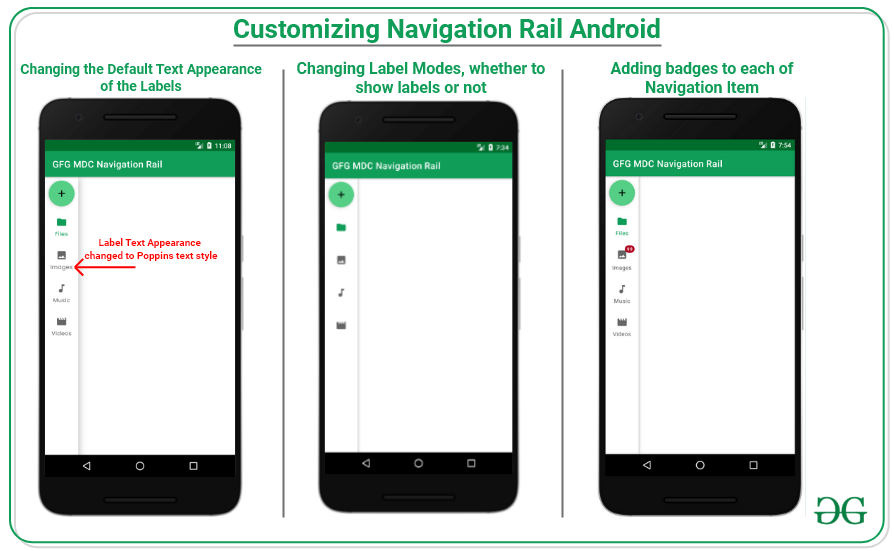 Note that while syncing your project you need to be connected to the network and make sure that you are adding the dependency to the app-level Gradle file as shown below. Note that, the layout is going to remain the same as in the previous article.

Essential Customizations are now discussed one by one

The labels for the icons are optional

There are four modes for labels for each of the icons. Those are:

selected -> The labels are shown only to the selected items on the navigation rail.

labeled -> The labels are shown for all the items.

unlabeled -> All the labels are hidden, even though the item is selected.

To include these values in XML there is an attribute for the navigation rail that is:

Have a look at the following example and output: 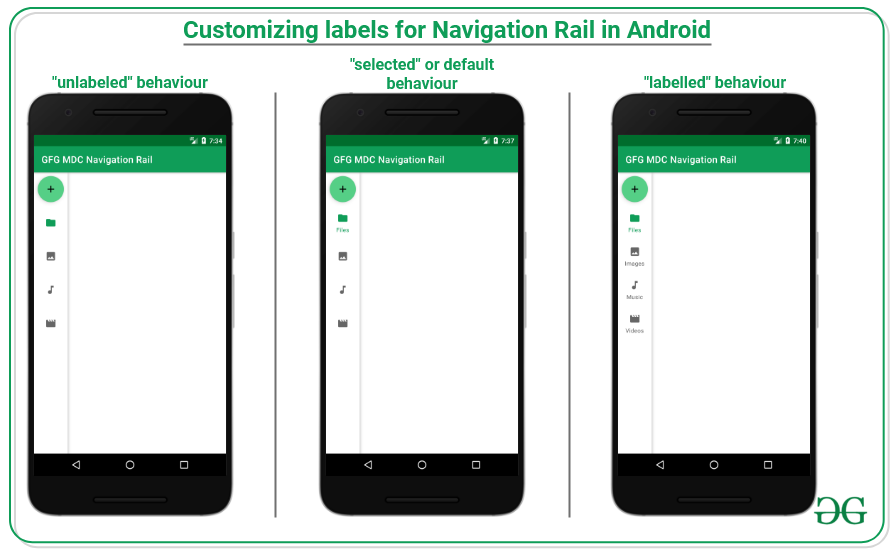 There is also a badge for items in the Navigation Rail. For example, whenever the new notification or count of the content inside the particular fragment increases, then it can only be informed to the user by increasing the count of the badge or simply a dot badge. Have a look at the following example to get an idea. Navigate to the app > res > layout > activity_main.xml and add the below code to that file. Below is the code for the activity_main.xml file.

Below is the code for the MainActivity.kt file. Comments are added inside the code to understand the code in more detail.

The best practice for adding any badges for the icons is, if there is a need of temporary hiding the badge until the next notification is received, then, in this case, changing the visibility of BadgeDrawable like the following:

Changing the Elevation of the Navigation Rail container

Have a look at the following example and its output:

Changing the color of the Navigation Rail container

Note that, by including this the size of the Navigation Rail becomes compact and it is advised to remove the Floating Action Button removing the header layout attribute in the Navigation Rail. Have a look at the following example to get an idea.

Changing the TextAppearance of the labels

The default text appearance of the labels is Caption in the Material Design Type system so that needs to be overridden with the custom font. So in the themes.xml file invoke the custom style for the Caption type system.

Now include the TextAppearance.MdcTypographyStyles.Caption in the attributes under the Navigation Rail:

Some other Attributes of Navigation Rail Container are:

Some other Attributes of Navigation Rail Items are:

Some other Attributes of Navigation Rail Items Icon are:

Some other Attributes of Navigation Rail Items Text Labels are: