For instance, we have declared a heading tag(h1) along with having assigned some property: value pair that is used to style the heading tag. Here, h1 is selector, { color: green; font-family: sans-serif; } is a declaration block and it can contain one or more declarations separated by semicolons, color: green; is a property: value pair that is applied to the HTML element in order to style them.

Every declaration has a CSS property name and a value, separated by a colon and is surrounded by curly braces. For declaring the multiple CSS properties, it can be separated by the semicolon.

We will focus ourselves to the Simple Selector and also understand its implementation through the examples.

Example: This example illustrates the use of the id selector for selecting the HTML elements by their id and style them. 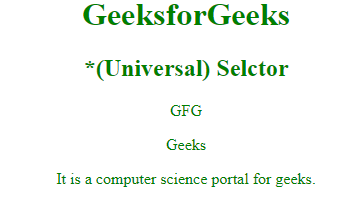