Critique of OSI Model and Protocols

Open System Interconnection (OSI) model is reference model that is used to describe and explain how does information from software application in one of computers moves freely through physical medium to software application on another computer. This model consists of total of seven layers and each of layers performs specific task or particular network function.

Although, OSI model and its protocols even TCP/IP models and its protocols are not perfect in each and manner. There is bit of criticism that has been noticed and directed at both of them. The most striking and unfortunate issue concerning OSI model is that it is perhaps the most-studied and most widely accepted network structure and yet it is not model that is really implemented and largely used. The important reasons why happen is given below:

1. Bad Timing :
In the OSI model, it is very essential and important to write standards in between trough i.e., apocalypse of two elephants. Time of standards is very critical as sometimes standards are written too early even before research is completed. Due to this, OSI model was not properly understood. The timing was considered bad because this model was finished and completed after huge and significant amount of research time. Due to this, the standards are ignored by these companies.

When the OSI came around, this model was perfectly released regarding research, but at that time TCP/IP model was already receiving huge amounts of investments from companies and manufacturers did not feel like investing in OSI model. So, there were no initial offerings for using OSI technique. While every company waited for any of other companies to firstly use this model technique, but unfortunately none of company went first to use this model. This is first reason why OSI never happen. 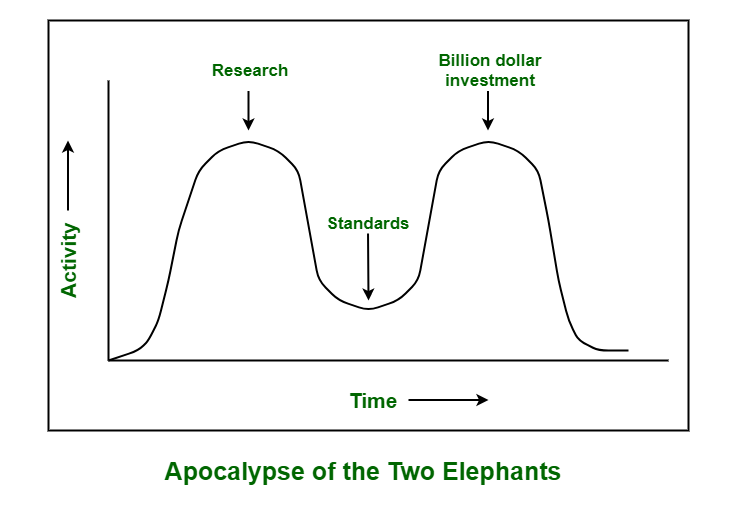 2. Bad Technology :
OSI models were never taken into consideration because of competition TCP/IP protocols that were already used widely. This is due to second reason that OSI model and its protocols are flawed that means both of them have fundamental weakness or imperfection or defect in character or performance or design, etc. The idea behind choosing all of seven layers of OSI model was based more on political issues rather than technical. Layers are more political than technical.

OSI model, along with all of its associated service definitions and protocols, is highly complex. On the other hand, other two layers i.e. Data link layer and network layer both of them are overfull. Documentation is also highly complex due to which it gets very difficult to implement and is not even very efficient in operation or function. Error and flow control are also duplicated i.e., reappear again and again in multiple layers or each layer. On the other hand, most serious and bad criticism is that this model is also dominated by communications mentality.

3. Bad Implementations :
The OSI model is extraordinarily and much more complex due to which initial implementations were very slow, huge, and unwidely. This is the third reason due to which OSI became synonymous with poor quality in early days. It turned out to not be essential and necessary for all of seven layers to be designed together to simply make things work out.

On the other hand, implementations of TCP/IP were more reliable than OSI due to which people started using TCP/IP very quickly which led to large community of users. In simple words, we can say that complexity leads to very poor or bad implementation. It is highly complex to be effectively and properly implemented.

4. Bad Politics :
OSI model was not associated with UNIX. This was fourth reason because TCP/IP was largely and closely associated with Unix, which helps TCP/IP to get popular in academia whereas OSI did not have this association at that time.

On the other hand, OSI was associated with European telecommunications, European community, and government of USA. This model was also considered to be technically inferior to TCP/IP. So, all people on ground reacted very badly to all of these things and supported much use of TCP/IP.

Even after all these bad conditions, OSI model is still general standard reference for almost all of networking documentation. There are many organizations that are highly interested in OSI model. All of networking that is referring to numbered layers like layer 3 switching generally refers to OSI model. Even, an effort has also been made simply to update it resulting in revised model that was published in 1994.