In MongoDB, we are allowed to create new users for the database. Every MongoDB user only accesses the data that is required for their role. A role in MongoDB grants privileges to perform some set of operations on a given resource. In MonogDB, users are created using createUser() method. This method creates a new user for the database, if the specified user is already present in the database then this method will return an error.

1. user: It contains authentication and access information about the user to create. It is a document.

Or you can specify a document that contains the role and db fields. It is generally used when the role is specified in a different database.

2. writeConcern: It is an optional parameter. It manages the level of Write Concern for the creation operation. It takes the same field as the getLastError Command takes.

How to create an administrative user?

In this example, we are going to create an administrative user in the admin database and gives the user readWrite access to the config database which lets the user change certain settings for sharded clusters.

How to create a normal user without any roles?

In MongoDB, we can create a user without any roles by specifying an empty array[] in the role field in createUser() method.

In the following example, we are going to create a user without roles.

Here, we are working on the “example” database and created a user named “geeks” without roles.

How to create a user with some specifying roles?

In MongoDB, we can create a user with some specified roles using the createUser() method. In this method, we can specify the roles that the user will do after creating. Let us discuss this concept with the help of an example:

In this example, we are going to create a user with some specified roles.

Here, we create a user whose name is “new_one_role”, password is “with_roles” and the specified roles are:

How to create a user for a single database?

In MongoDB, we can also create a user for single database using createUser() method. Let us discuss this concept with the help of an example:

Here, we create a user whose user name is “Robert”, password is “hellojose”, and we assign a role for the user which in this case needs to be a database administrator so it is assigned to the “userAdmin” role. This role will allow the user to have administrative privileges only to the database specified in the db option, i.e., “example”.

How to create a user with authentication restrictions?

In MongoDB, authentication is a process which checks whether the user/client who is trying to access the database is known or unknown. If the user is known then it allows them to connect with server. We can also create a user with authentication restrictions using createUser() method by setting the value of authenticationRestrictions field. This field provides authentication permission of the user and contains the following fields:

In this example, we are going to create a user with authentication restrictions: 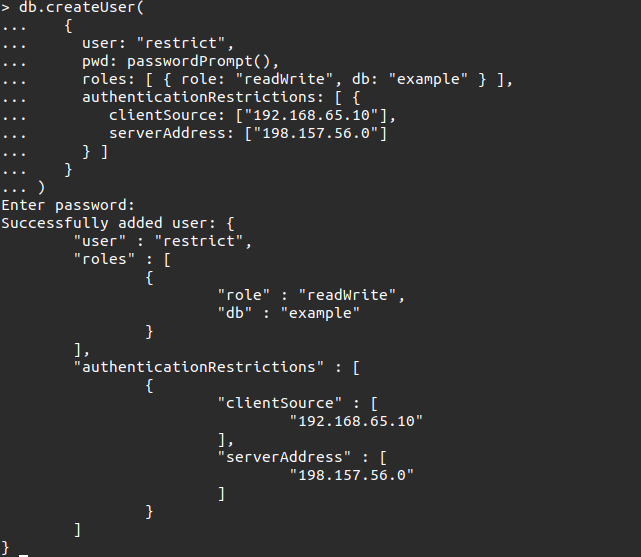 How to drop a User?

In Mongodb, we can also drop a user using dropUser() method. This method returns true when the user is deleted otherwise return false.

In this example, we will drop a user whose name is Robert.

My Personal Notes arrow_drop_up
Previous
30 Days of SQL - From Basic to Advanced Level!
Next
Difference Between HTML, XML and DHTML
Recommended Articles
Page :
Difference between Web Role and Worker Role in Node.js
17, Jun 21
Set Database From Single User Mode to Multi User in SQL
13, Dec 21
MongoDB $add Operator
13, Jul 20
How to add unique constraint in collection of MongoDB using Node.js?
08, Feb 21
How to add range in the Collection of Mongodb using Node.js ?
15, Feb 21
How to add Timestamp in Mongodb Collection using Node.js ?
09, Mar 21
How to create HTML form that accept user name and display it using PHP ?
23, Jun 21
MongoDB | Create Database using MongoShell
18, Apr 19
Create a Newsletter Sourcing Data using MongoDB
25, May 21
How to create new Mongodb database using Node.js ?
19, Nov 20
How to create new Collection in MongoDB using Node.js ?
29, Nov 20
How to Create Database & Collection in MongoDB?
03, Feb 21
Create Relationship in MongoDB
16, Feb 21
How to create a user defined javap tool?
06, May 19
How to create a variable using a user-defined name in JavaScript ?
19, May 21
How to Create a New User in Windows 10?
03, Jun 20
How to create an unordered_map of user defined class in C++?
09, Dec 18
How to create an unordered_set of user defined class or struct in C++?
20, Dec 18
How to create a Java HashMap of user defined class type?
01, Mar 19
How to Create a User Defined Function in Excel VBA?
14, Dec 21
What is the role of src and dist folders in JavaScript/jQuery ?
14, Apr 20
What is the role of ng-app, ng-init and ng-model directives in AngularJS ?
23, Jul 21
Difference between “git add -A” and “git add”
20, Jun 21
What is the purpose of "role" attribute in HTML ?
18, Nov 19
Article Contributed By :

Complete Interview Preparation
View Details
System Design-Live Classes for Working Professionals
View Details
Data Structures & Algorithms- Self Paced Course
View Details
Most popular in MongoDB
More related articles in MongoDB
We use cookies to ensure you have the best browsing experience on our website. By using our site, you acknowledge that you have read and understood our Cookie Policy & Privacy Policy