One of the way to create Pandas DataFrame is by using zip() function.

You can use the lists to create lists of tuples and create a dictionary from it. Then, this dictionary can be used to construct a dataframe.

zip() function creates the objects and that can be used to produce single item at a time. This function can create pandans DataFrames by merging two lists.

Above two lists can be merged by using list(zip()) function. Now, create the pandas DataFrame by calling pd.DataFrame() function. 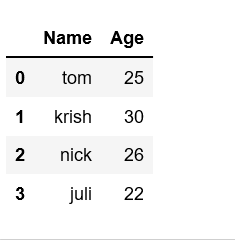