Google Apps Script is a cloud-based tool used for automating basic tasks. You can write your code in modern JavaScript. Using Apps Script you can add custom menus, write custom functions and macros for Google sheets, and can publish your web Apps. You can automate tasks in Google Sheets, Google Docs, gmail, etc. For using this, you will need a Google account and Google Chrome installed in your system. It is written in script editor in Google Chrome.

In this article, we will be writing a script to create a chart from the data available in Google Sheet. Here, we will be using Chart.js which is a JavaScript library. We are basically developing a web app by publishing the script .

Web App: The script can be published as web app if it contains the function either doGet(e) or doPost(e) and the function must return HTML Service HtmlOutput object. You will learn how to link HTML file to the script in the steps discussed below.

Step 1: Prepare your Google Sheet data. We are having the data of the number of Covid cases in different states in India in lakhs which is as shown below. So, the first step is to prepare your data. 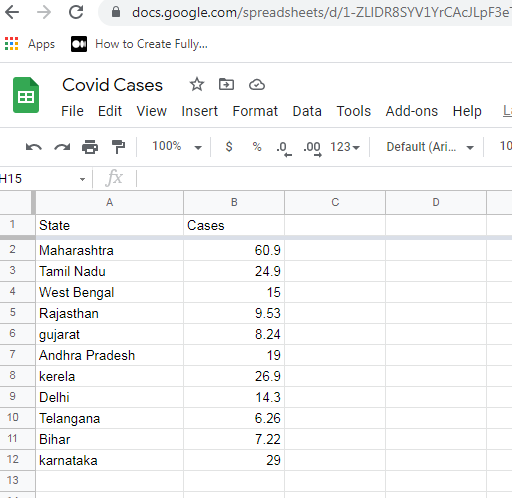 Step 2: Add standard Google Apps Script function doGet(e) to code.gs file.  Next step is to go to the tools and select script editor. Save it as ‘Chart’ or any other name.Here we are saving as code.gs . Also create a new HTML file and save it as ‘webappchart.html’ .

Add the below code in code.gs file.

The above function is the standard Google Apps Script function which is used to publish/deploy your web app. This function returns an output file that is nothing but your HTML file.

Step 3: Add the required CDN in your HTML file. Next open your HTML file i.e webappchart.html and we will include the cdn for jQuery and Chartjs which we will be using to make our chart.

Step 4: Create a canvas for the rendering charts. In the next step we complete our html code by adding canvas for displaying our chart inside a div element in the body tag as written below:

The HTML code is completed over here and now we add the script code.

Step 5: Adding the jQuery Script Code. We initially write the standard jQuery method which is called when the screen is fully loaded with html code and we call getCases() method inside it which we will be defining in the next step.

We then define our getCases() function as below:

In the above code we are calling the standard function of Google Apps Script.

Explanation: In the above code we are setting the active spreadsheet to ss and the sheet which is required i.e., Sheet 1 to casesSheet . Then we are getting the last row and setting it in getLastrow variable. Finally we are returning the values from the range given above i.e., starting from second row and so on. An array containing the values from the whole sheet is returned over here and it will be accessible as ar. We are then iterating over the array and pushing the first item in an array as label[] and the second item in an array as data[]. We then will be using these arrays for creating a chart.

Step 7: Creating the chart. Now the data is prepared and we create a bar chart as below:

Explanation: In the above code we are assigning number of cases to data and labels are nothing but names of different states in my case. Then we are setting the background color and the border colors of all the bars in our bar chart.

Now let’s see the complete code of the above implementation.