Pointers are symbolic representations of addresses. They enable programs to simulate call-by-reference as well as to create and manipulate dynamic data structures. Iterating over elements in arrays or other data structures is one of the main use of pointers.

The address of the variable you’re working with is assigned to the pointer variable that points to the same data type (such as an int or string). 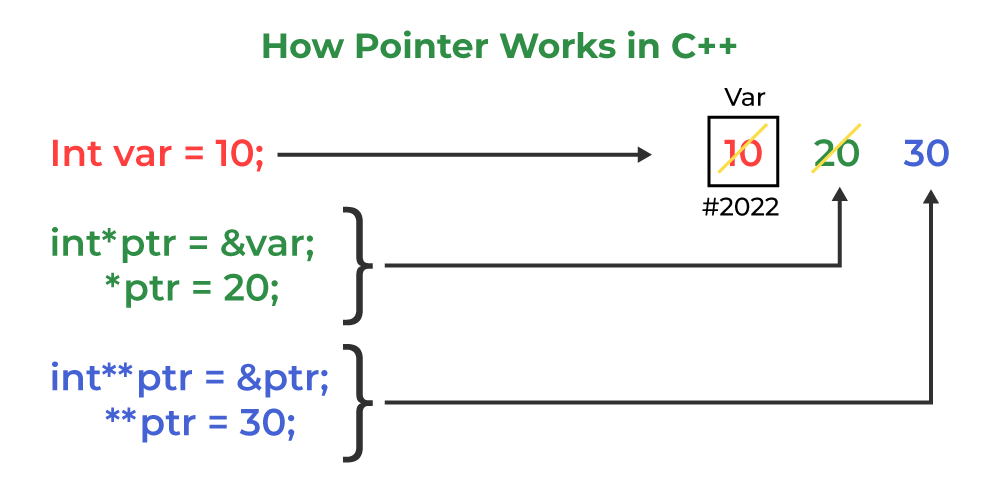 How to use a pointer?

The reason we associate data type with a pointer is that it knows how many bytes the data is stored in. When we increment a pointer, we increase the pointer by the size of the data type to which it points.

There are 3 ways to pass C++ arguments to a function:

In C++, by default arguments are passed by value and the changes made in the called function will not reflect in the passed variable. The changes are made into a clone made by the called function. If wish to modify the original copy directly (especially in passing huge object or array) and/or avoid the overhead of cloning, we use pass-by-reference. Pass-by-Reference with Reference Arguments does not require any clumsy syntax for referencing and dereferencing.

An array name contains the address of the first element of the array which acts like a constant pointer. It means, the address stored in the array name can’t be changed. For example, if we have an array named val then val and &val[0] can be used interchangeably.

If pointer ptr is sent to a function as an argument, the array val can be accessed in a similar fashion. Pointer vs Array

A limited set of arithmetic operations can be performed on pointers which are:

(Note: Pointer arithmetic is meaningless unless performed on an array.)

This declares an array with the literal representation for “geek”, and then a pointer to its first element is assigned to ptr. If we imagine that “geek” is stored at the memory locations that start at address 1800, we can represent the previous declaration as:

As pointers and arrays behave in the same way in expressions, ptr can be used to access the characters of a string literal. For example:

In C++, we can create a pointer to a pointer that in turn may point to data or another pointer. The syntax simply requires the unary operator (*) for each level of indirection while declaring the pointer.

Here b points to a char that stores ‘g’ and c points to the pointer b.

This is a special type of pointer available in C++ which represents the absence of type. Void pointers are pointers that point to a value that has no type (and thus also an undetermined length and undetermined dereferencing properties). This means that void pointers have great flexibility as they can point to any data type. There is a payoff for this flexibility. These pointers cannot be directly dereferenced. They have to be first transformed into some other pointer type that points to a concrete data type before being dereferenced.

A null pointer is a pointer that point nowhere and not just an invalid address. Following are 2 methods to assign a pointer as NULL;

This article is contributed by Abhirav Kariya. If you like GeeksforGeeks and would like to contribute, you can also write an article using write.geeksforgeeks.org. See your article appearing on the GeeksforGeeks main page and help other Geeks. Please write comments if you find anything incorrect, or if you want to share more information about the topic discussed above.

Previous
Strings in C++ and How to Create them?
Next
C++ Classes and Objects
Related Articles
1. Difference between constant pointer, pointers to constant, and constant pointers to constants
2. What are Wild Pointers? How can we avoid?
3. Declare a C/C++ function returning pointer to array of integer pointers
4. Smart Pointers in C++ and How to Use Them
5. Pointers vs References in C++
6. Computing Index Using Pointers Returned By STL Functions in C++
7. Applications of Pointers in C/C++
8. C++ Program to compare two string using pointers
9. Program to Reverse a String using Pointers
10. How to implement user defined Shared Pointers in C++
Article Contributed By :