Copper (Cu) is one of the elements that was never discovered. They have been a part of every stage in the evolution of civilization. The metal has been utilized for so long that it can be found isolated as a pure element. One may be tunneling in a mine and come find pure copper in a variety of forms. It is the 29th element in the periodic table, denoted by the symbol ‘Cu’ from the Latin term ‘cuprum.’ Copper is a soft but strong metal. It combines easily with other metals to make alloys such as bronze and bronze. Bronze is a tin-copper alloy, whereas brass is a zinc-copper alloy. Copper and brass can be recycled quickly. Perhaps 70% of the copper that is now in use has been recycled at least once.  Copper has a density of 8.96 and an atomic number of 29. Copper has been an important element of human culture for thousands of years. Silver, gold, copper, and iron have all been used in some way.

Cupric Carbonate is another name for Copper II Carbonate. Furthermore, it is a chemical substance. It is also an ionic solid compound composed of copper (II) cations Cu2+ and carbonate anions CO2-3. The term copper carbonate or cupric carbonate is most usually used to refer to a basic copper carbonate such as Cu2(OH)2CO3. This can be found in nature in the form of the mineral malachite or the azurite mineral Cu3(OH)2(CO3)2. As a result, the qualifier neutral can be used in place of basic, which specifically refers to CuCO3.

CuCO3 is the formula for Copper II Carbonate. 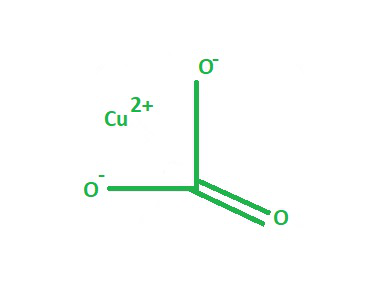 Question 1: Is copper carbonate an organic or inorganic compound?

Copper carbonate (CuCO3) is an inorganic chemical compound with the formula CuCO3. Cupric carbonate is another name for this chemical, which exists as an ionic salt containing copper ions in a +2 oxidation state and carbonate anions. Copper carbonate quickly interacts with water or airborne moisture.

Question 2: What is the source of the green color in copper II carbonate?

Copper carbonate is continuously present in the environment as copper carbonate hydroxide. When the copper powder reacts with oxygen, it forms an opaque coating of copper oxide that is green or bluish-grey in colour. This coating is known as the patina. As a result, copper carbonate has a green colour.

Question 3: Is copper II carbonate an ionic or a covalent compound?

Cupric carbonate, often known as copper(II) carbonate, is a chemical compound having the formula CuCO3. It is an ionic solid (a salt) at room temperature, composed of copper(II) cations Cu2+ and carbonate anions CO23+.

Question 4: How can copper carbonate be removed?

Water soaking or steam washing should remove contaminated copper sulphate unless it is a copper carbonate or basic carbonate.

Question 5: What happens when you mix copper carbonate with water?

Copper carbonate is a solid that is insoluble in water. It is difficult to recover the copper because the carbonate cannot dissolve into copper ions and carbonate ions. When an acid is added to carbonate water, it produces carbon dioxide and a salt.

Malachite, a small ore but a widespread copper mineral, basic copper carbonate, Cu2CO3(OH)2. Malachite is a prospecting guide for copper because of its unusual brilliant green colour and presence in the weathered zone of nearly all copper deposits .

Question 7: What occurs when sulfuric acid is mixed with a copper carbonate?