Convert JSON to CSV in Python

The full form of JSON is JavaScript Object Notation. It means that a script (executable) file which is made of text in a programming language, is used to store and transfer the data. Python supports JSON through a built-in package called JSON. To use this feature, we import the JSON package in Python script. The text in JSON is done through quoted-string which contains the value in key-value mapping within { }. It is similar to the dictionary in Python.

CSV (Comma Separated Values) is a simple file format used to store tabular data, such as a spreadsheet or database. CSV file stores tabular data (numbers and text) in plain text. Each line of the file is a data record. Each record consists of one or more fields, separated by commas. The use of the comma as a field separator is the source of the name for this file format.

Refer to the below articles to understand the basics of JSON and CSV.

For simple JSON data consisting of key and value pairs, keys will be headers for the CSV file and values the descriptive data. 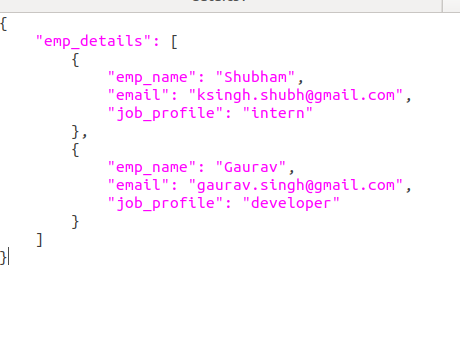 We want to convert the above JSON to CSV file with key as headers.

And, if you are working on JSON data like the following: