Contributions of the LGBTQ+ Community in Tech World

It is the month of June and do you know what it is significant for? Pride Month, yes!

For those of you who don’t know what pride month is, it is a tribute to those who were involved in the Stonewall Riots of 1969 & dedicated to the LGBTQIA+ (Lesbian, Gay, Bisexual, Transgender, Queer, Intersex and Asexual) community to acknowledge the rights of the individuals who are a part this community. The primary reason behind this celebratory month is to recognize their contributions. 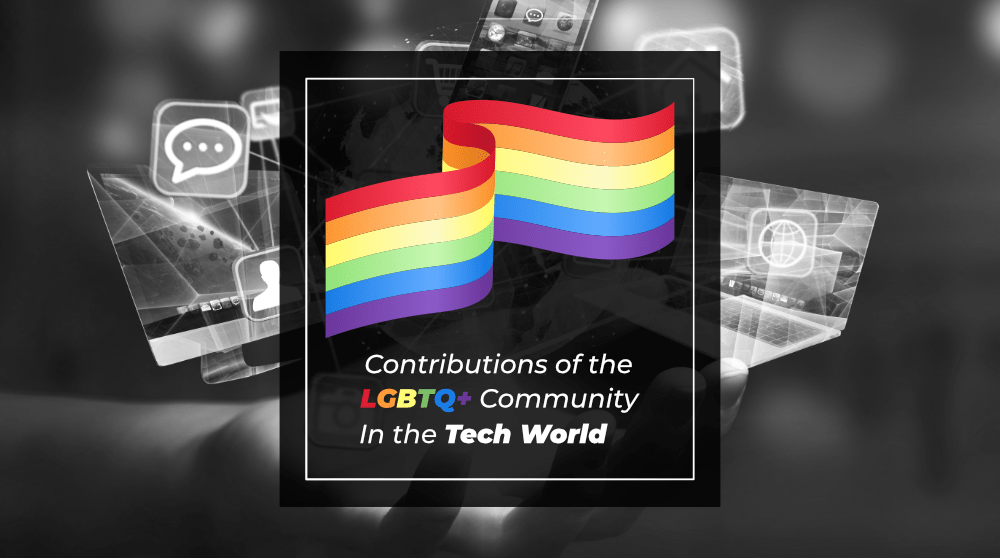 There are numerous inspiring personalities belonging to LGBTQIA+ who have contributed their knowledge towards the betterment of society in every field. In order to celebrate Pride Month, we’re going to tell you about some renowned and influential Geeks who have left their mark in the field of programming and the tech world!

Alan Turing is famously known for breaking the seemingly unbreakable Nazi Enigma Code during WW II, which shortened the war by two years and saved countless lives. This code had around 10^114 permutations. Turing was successful in creating an electromechanical machine that could decipher German intelligence. A graduate of the University of Cambridge as well as Princeton University, Turing has contributed enormously to the field of modern computer science & artificial intelligence.

One of his papers described a theoretical machine, capable of solving any problem on the basis of encoded instructions. It is said that all modern computers are in essence universal ‘Turing machines’. You might want to watch The Imitation Game on Netflix if you’d like to know more about his journey!

He was prosecuted on account of homosexuality and thus, put away from government work. In 2009, a public apology ensued, recognizing his work and apologizing for the treatment he was subjected to.

A renowned American scientist, 82-year-old Lynn Conway has been a strong advocate of transgender rights. With an IQ of 155, Conway was recruited by IBM in 1964 where she primarily engineered supercomputer technologies along with working on various tech advancements. However, despite the groundbreaking work she was pursuing, IBM fired her for being trans.

Lynn, in spite of facing numerous difficulties on all fronts, continued to fight all ordeals and climb the ladder of success. She worked on computer chip design, VLSI design amongst others over the years.

From being recruited by the nation’s Department of Defense to being a professor at the University of Michigan, Conway is breaking the transgender barriers one after the other.

Jon “maddog” Hall has been a part of the computing industry since 1969. A computer programmer, Hall is also an advocate for open-source software. Currently, designated as the Board Chair for Linux Professional Institute, Jon has worked in several organizations as a product manager, consultant, systems designer amongst many other job roles.

On Alan Turing’s 100th birthday, Jon Hall came out as gay in the former’s honor. A strong advocate of the expansion of free software, Jon “maddog” Hall has been successful in making the tech communities all more connected.

Timothy Donald Cook aka Tim Cook is another inspiring example from the LGBTQIA+ community who made it big in the tech world. He has been the CEO (Chief Executive Officer) of leading tech giant Apple Inc. since the year 2011. And most importantly, since that time i.e. from 2011 Tim has almost doubled the organization’s revenue and profit while simultaneously making the company’s market value cross the USD 2 trillion mark. It was in the year 2014 when Tim publicly came out as gay & eventually he became the first CEO of a Fortune 500 company to do the same.

Peter was an acclaimed bisexual British Computer Scientist who was actually one of the first individuals to identify that lambda calculus can be used significantly in modeling a programming language. He graduated from Cambridge University and in the initial years, he used to work as an assistant to Christopher Strachey when Christopher was working in London as an independent computer consultant. Peter contributed a lot in the tech domain as he was the key person behind the invention of the stack, dump SECD machine, ISWIM programming language, Landin off-side rule, and much more. He became involved with the Gay Liberation Front (GLF) in the initial years of the 1970s.

And the list of such inspiring personalities doesn’t end here. There are numerous other examples also of individuals like Edith Windsor, Sophie Wilson, Christopher Strachey, and many others who have proudly represented the LGBTQIA+ community within the tech industry!

Previous
Top 10 Security Risks in Web Applications
Next
Standard Practices for Protecting Sensitive Data in Java
Related Articles
1. GeeksforGeeks Discord is LIVE - Join Our Ever Growing Tech Community!
2. Top 5 Tech Giants in the World
3. 10 of the Weirdest Tech Inventions in the World
4. 7 Tech Trends Expected to Rule in the Post-Covid World
5. How to begin Contributing to DuckDuckGo’s Open Source Community
6. [TopTalent.in] How Tech companies Like Their Résumés
7. How are Tech Companies Helping Fight COVID-19?
8. 10 Tech Devices that help People with Disabilities
9. What is Artificial Intelligence as a Service (AIaaS) in the Tech Industry?
10. What is Data as a Service (DaaS) in the Tech Industry?
Article Contributed By :