Construct a DFA that Start With aa or bb

DFA (Deterministic Finite Automata or Acceptor) is a finite state machine that accepts or rejects strings of symbols. DFA accepts the string if it reaches the final state otherwise it rejects it. In these types of problems, we have some given parameters according to which we should design DFA.

Problem– Construct a DFA that either starts with aa or with bb from input (a,b).

Solution– In this problem, two parameters are given: 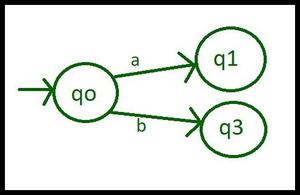 Step-5: Till now, our machine accepts strings that starts from ‘aa’ or from ‘bb’ but we also have to take care of all the symbols after the string has begun from ‘aa’ or ‘bb’ and hence we introduce ourselves loops in q2(final state) and D(dead state).

Transition table and transition rules for the above diagram:

In the transition table, the initial state(qo) is represented by → and the final state is q2 and has two circles.