Momentum or Linear momentum is defined as the product of the mass of an object and its velocity. Or in other words momentum is termed as “mass in motion.” Because all objects have mass, if an object is moving, it has momentum, its mass is in motion.

where p is the linear momentum, m is the mass and v is the velocity of the object.

From this, it can be concluded that the more the mass of the object or velocity more will be the linear momentum.

Momentum is a vector quantity because it has both direction and magnitude. Its direction is the same as that of velocity.

The kilogram-meter-per-second is the SI unit of momentum (kg m/s).

Graphically, the relationship between mass and velocity in terms of momentum can be plotted as: 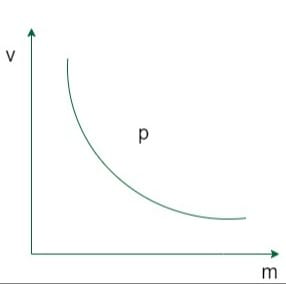 The three laws of motion provided by Newton are stated below:

The law of conservation of linear momentum is a significant result of Newton’s third law of motion in accordance with the second law of motion.

Law of Conservation of Momentum

The conservation of momentum principle states that if two objects collide, the total momentum before and after the collision will be the same if no external force acts on the colliding objects. Or simply it can be stated as:

When the net external force is zero, the momentum of the system remains constant, as expressed mathematically by the conservation of the linear momentum formula.

From this it can be interpreted as, for any two or more bodies in an isolated system acting upon each other, their total momentum remains constant unless an external force is applied. Thus, it can be said that momentum can neither be created nor destroyed. This law is valid only for linear motion. Internal forces cannot change the total momentum of the system however they may change the momentum of each particle of the system.

For instance, in a rocket, fuel is burnt due to which gases are ejected downwards. Then the rocket moves up to conserve momentum. Fuel in a jet plane burns and ejects gases in a backward direction. Therefore, by conservation of momentum, the plane moves ahead.

Derivation of Conservation of Momentum 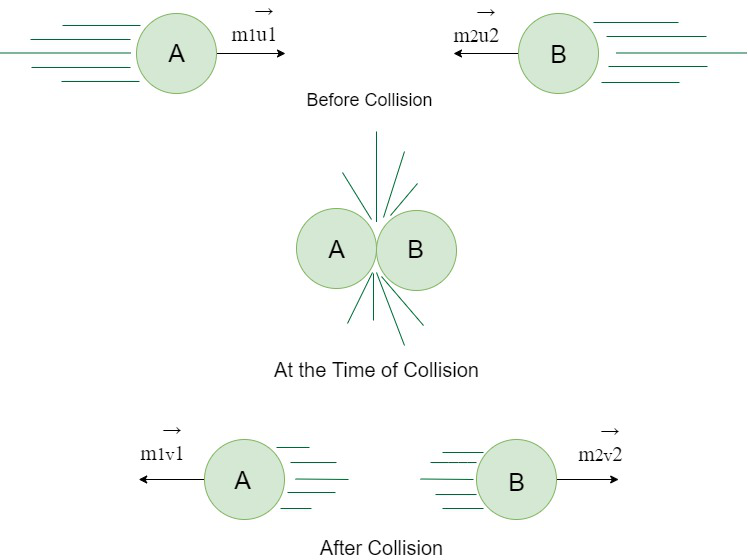 Pictorial representation for Conservation of Momentum

Let’s calculate the change in momentum for body A and it is represented by pA and is given by,

Let’s calculate the change in momentum for body B and it is represented by pB and is given by,

Now, from Newton’s Third Law of Motion it can be written as,

Now, from Newton’s Second Law of Motion it can be written as,

where a1 and a2 are the acceleration of bodies A and B.

Therefore, this implies that,

this equation (4) represents the equation of law of conservation of momentum.

Thus, from this it is concluded that momentum is conserved.

Problem 1: A body of mass 10 kg is accelerated uniformly from a velocity of 5 m/sec to 10 m/sec in 5 sec. Calculate the initial and final momentum of the body. Also, find the magnitude of the force acting on that body?

Initial momentum of the body, pi = m × u

Let mass of the second object be m.

where m and a be the mass and acceleration of the body.

Let us calculate the mass of the second body from (1)

Thus, the acceleration under the same force will be 3.2 m/s2.

Problem 3: A car is an acceleration at 20 m/s2 and after some time it accelerates at 40 m/s2 what is the ratio of force exerted by the engines?

Therefore, the initial and the final force is,

And their ratios is,

Problem 4: What will be the acceleration when 20N of force is applied on a 100 kg block?

Since, force is defined as,

Problem 5: If a constant force of 5 N is constantly applied on a block of 5 kg, How much the acceleration of the block?