Metals are found in ore in the form of compounds with other elements. Metal extraction is the process of extracting metal from its ore. The techniques for extracting metals from their ores and refining them are referred to as metallurgy. There is no single procedure that can extract all of the metals. The procedures to be employed differ depending on the metal. The concentration of ore, or enrichment of ore, is one of the most important steps in the extraction of metal from its ore, and it is covered further below.

What is an Ore?

Ore is a deposit of one or more precious minerals in the Earth’s crust. Metals are essential to industry and trade, such as copper, gold, and iron, which are found in the most valuable ore deposits. Ore is a solid substance containing minerals or a combination of minerals from which metal can be recovered using a variety of procedures such as ore concentration, mental isolation, and metal refining. Ores are minerals that may be used to extract metals in a convenient and profitable manner.

There are no unpleasant impurities in ore, and it includes a high percentage of metal. Minerals are known to be present in ores. Ore is the solid material from which a pure metal can be extracted. Impurities, or undesirable minerals, are present in the ore minerals. Gangue refers to the undesired impurities found in ore, such as sand, rocky debris, and so on. These impurities or gangue must be removed before the metal can be extracted from the ore.

What is Concentration of Ore?

Minerals can be found in ores, as we all know. To extract minerals, we must first dig the mineral’s ore. It is necessary to remove the impurities present in an ore before extracting the metal. Minerals contain impurities, which are undesired elements. After being mined from the earth, the ore contains various undesired impurities such as sand, rough minerals, and so on. Gangue is a term for undesired impurities such as earthy materials, rocks, sandy materials, limestone, and so on.

The ores are concentrated on the basis of the type of impurities and their percentage proportion to remove these unwanted substances. We achieve a concentrated ore with a high percentage of metal by eliminating these impurities. The concentration of ore, also known as ore enrichment, is the process of removing gangue particles from ore in order to enhance the percentage of metal in the ore. The difference in physical or chemical properties of the ore and the impurities determines the procedures used to remove impurities from the ores. To obtain a concentrated ore containing a significantly higher percentage of the metal, the first step in metallurgy is to remove these undesired impurities from the ore. The physical or chemical properties of the gangue and ores determine the method employed to extract them from the ore. Ore concentration can be accomplished through a variety of methods, including hydraulic washing, magnetic separation, froth flotation, and leaching. The next sections go through some of the processes used to concentrate the ore.

Methods of Concentration of Ore

The various processes for the concentration of various types of ores are as follows.

It was the traditional system of directly concentrating ore with the hands. With the use of a hammer, the gangue or adhering solid matrix is removed from the ore in this procedure. The separation and identification of gangue are based on colour or lump form differences.

On passing the ore via an upward stream of water, the lighter gangue particles are separated from the heavier metal ore. This is a gravity separation method.

The purpose of this process is to extract gangue from sulphide ores. The ore is pulverised and mixed with water to form a suspension. Collectors and Froth Stabilizers are added to this. Collectors like pine oils, fatty acids, etc. boost the metal part of the ore’s non-wettability, allowing it to form a froth. Cresols, aniline, and other froth stabilisers keep the foam going. The oil lubricates the metal, while the water lubricates the gangue. The froth is created by constantly stirring up the suspension with paddles and air. To recover the metal, the frothy metal is skimmed off the top and dried.

To separate the ore and gangue, magnetic characteristics of either the ore or the gangue are used. The ore is first finely processed before being conveyed on a conveyor belt that passes over a magnetic roller. The magnetic ore stays on the belt, while the gangue slides off. By eliminating non-magnetic impurities, this process is utilised to concentrate magnetic ores of iron such as magnetite and chromite and manganese (pyrolusite). A magnetic separator is used in this procedure.

A magnetic separator is made out of two rollers and a leather belt. One of the two rollers has a magnet embedded in it. The finely powdered magnetic ore is dropped over the moving belt at one end in this way. The ore particles are attracted by the magnet and create a separate heap from the non-magnetic impurities when the powdered ore falls down from the moving belt at the other end with a magnetic roller. 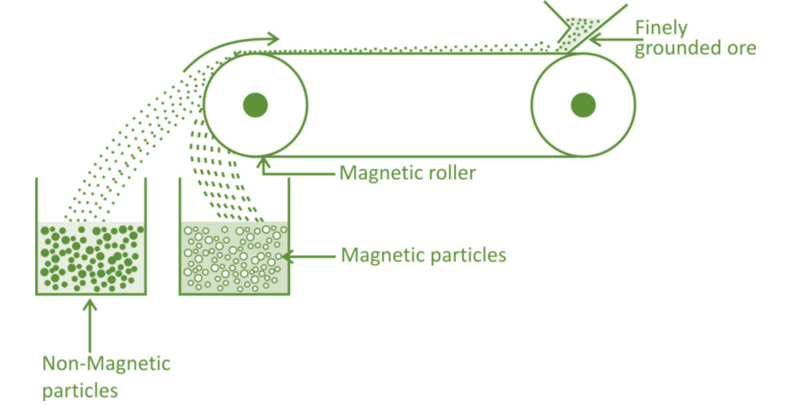 Question 1: In metallurgy, what process is utilised to concentrate sulphide ore?

Sulphide ores are concentrated using the froth flotation process. The method is based on the foaming agent’s and water’s preferential wetting qualities.

Question 2: Which is the concentration of ore process that is based on gravity separation?

Gravity separation, also known as hydraulic washing, is a separation technique that uses the specific gravity variations between metallic ore and gangue particles to separate the two.

Question 3: Give an example of a method for concentrating zinc sulphide ores.

Question 4: What is the significance of ore concentration?

The concentration of ore is required because it is much easier to extract a metal once the impurities have been removed.

Question 5: Give an example of a method for concentrating lead oxide ores.

Hydraulic washing is a concentration of ore method for lead oxide ores.