A computer is a device that is electronic and that accepts data, processes that data, and gives the desired output. It performs programmed computation with great accuracy & higher speed. Or in other words, the computer takes data as input and stores the data/instructions in the memory (use them when required). It then processes the data and converts it into useful information. Finally, it gives the output. Here, input refers to the raw data that we want the machine to process and return to us as a result, output refers to the response that the machine provides in response to the raw data entered and the processing of data may involve analyzing, searching, distributing, storing data, etc. Thus, we can also call a computer data processing system.

In general, memory is of three types:

Now we discuss each type of memory one by one in detail:

1. Primary Memory: It is also known as the main memory of the computer system. It is used to store data and programs or instructions during computer operations. It uses semiconductor technology and hence is commonly called semiconductor memory. Primary memory is of two types:

(i) RAM (Random Access Memory): It is a volatile memory. Volatile memory stores information based on the power supply. If the power supply fails/ interrupted/stopped, all the data & information on this memory will be lost. RAM is used for booting up or start the computer. It temporarily stores programs/ data which has to be executed by the processor. RAM is of two types:

(ii) ROM (Read Only Memory): It is a non-volatile memory. Non-volatile memory stores information even when there is a power supply failed/ interrupted/stopped. ROM is used to store information that is used to operate the system. As its name refers to read-only memory, we can only read the programs and data that is stored on it. It contains some electronic fuses that can be programmed for a piece of specific information. The information stored in the ROM in binary format. It is also known as permanent memory. ROM is of four types:

(i) Magnetic Tapes: Magnetic tape is a long, narrow strip of plastic film with a thin, magnetic coating on it that is used for magnetic recording. Bits are recorded on tape as magnetic patches called RECORDS that run along many tracks. Typically, 7 or 9 bits are recorded concurrently. Each track has one read/write head, which allows data to be recorded and read as a sequence of characters. It can be stopped, started moving forward or backward, or rewound.

(ii) Magnetic Disks: A magnetic disc is a circular metal or a plastic plate and these plates are coated with magnetic material. The disc is used on both sides. Bits are stored in magnetized surfaces in locations called tracks that run in concentric rings. Sectors are typically used to break tracks into pieces. 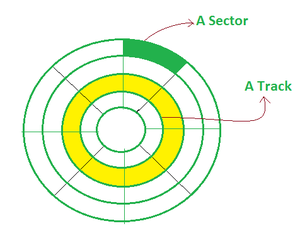 Hard discs are discs that are permanently attached and cannot be removed by a single user.

(iii) Optical Disks: It’s a laser-based storage medium that can be written to and read. It is reasonably priced and has a long lifespan. The optical disc can be taken out of the computer by occasional users. Types of Optical Disks :

3. Cache Memory: It is a type of high-speed semiconductor memory that can help the CPU run faster. Between the CPU and the main memory, it serves as a buffer. It is used to store the data and programs that the CPU uses the most frequently.

Question 1. What are the types of memories?

There are three types of memory:

Question 2. What is Volatile and Non Volatile memory?

Question 3. What is the full form of CD-ROM?

CD-ROM is stands for compact disk read only memory

Question 5. Explain any four differences between RAM and ROM?

Question 6. How to erase data in EPROM?

In EPROM, using ultraviolet rays we can easily erase data