Computer Graphics has become a common element in today’s modern world. Be it in user interfaces, or data visualization, motion pictures, etc, computer graphics play an important role. The primary output device in a graphics system is a video monitor. Although many technologies exist, the operation of most video monitors is based on the standard Cathode Ray Tube (CRT) design.   A cathode-ray tube is a central technology used in a device called a Cathode Ray Oscilloscope which is the scientific name of the type of television your parents or grandparents used to watch.

Cathode Ray Tubes (CRT) –
A cathode ray tube (CRT) is a specialized vacuum tube in which images are produced when an electron beam strikes a phosphorescent surface.It modulates, accelerates, and deflects electron beam(s) onto the screen to create the images. Most desktop computer displays make use of CRT for image displaying purposes. 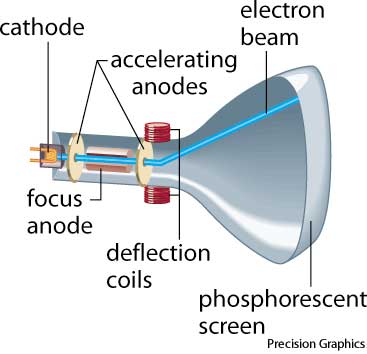 Construction of a CRT –

Now as this highly energetic beam strikes the surface of the screen, these electrons are stopped and their kinetic energy is absorbed by the phosphor screen (atoms). Some energy is wasted in heat also, but the majority of the kinetic energy gets transferred to the phosphor atoms. As these atoms receive this huge amount of energy, they get excited to a higher energy level.

After a short time, these atoms start returning to their original energy level. The original level is at a lower energy level than the excited one, hence the atoms release some energy while coming down. This extra energy is dissipated in the form of a small quantum of light. Thus the de-excitation results in a bright-colored spot on the screen. The frequency (color) of the spot depends on the difference between the two energy levels (excited level and ground-state level).

Different kinds of phosphors are used in a CRT. The difference is based upon the time for how long the phosphor continues to emit light after the CRT beam has been removed. This property is referred to as Persistence. Basically, persistence means how much time is taken by the emitted light to reduce to one-tenth of its original intensity. Now, phosphors with lower persistence require higher refresh rates to maintain a picture on the screen without any flicker.