The time complexity of a Turing machine is given by the function T(n), where

T(n) = Maximum number of moves made by the TM to process a string of length n.

The space complexity of the Turing machine is given by the function S(n), where

S(n) = Maximum number of tape squares used by the TM for an input of length n.

The time complexity of a simple Turing machine :
Consider the language,

To recognize a string of the form ωcωR , the TM will require :

The time complexity can be reduced by taking a two-tape machine.

The TM makes a maximum of n+1 moves.

Chomsky Hierarchy :
A grammar can be classified on the basis of production rules. Chomsky classified grammars into following types : 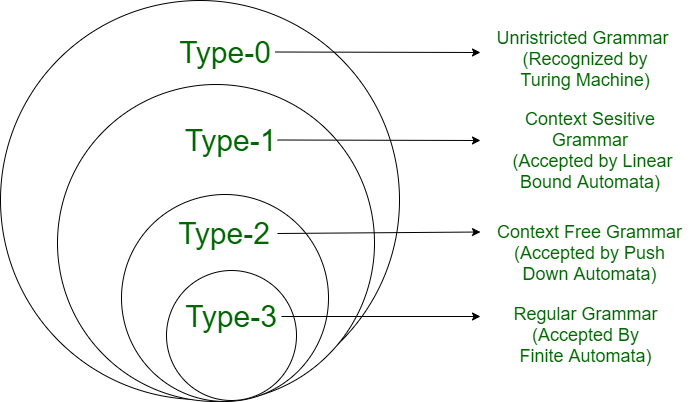 Type-3  or Regular Grammar :
A grammar is called type 3 or regular grammar if all its productions are of the following forms:-

A language generated by type-3 grammar is known as regular language.

Type-2 or Context-Free Grammar :
A grammar is called type 2 or context-free grammar if all its productions are of the following form A ⇢ α where  A ∈ V and α ∈ (V ∪ T)*.

The language generated by a type-2 grammar is called a context-free language.

Type-1 or Context Sensitive Grammar :
A grammar is called a type-1 or context-sensitive grammar if all its productions are of the following form : α ⇢ β, where β is at least as long as α.