Complex integration of a real variable

, f(t) is integrable is it is continuous (Flashback to integration in real calculus), and for that matter, if u(t) and v(t) are continuous. We can clearly see that here f(t) is just a linear combination of u(t) and v(t). Hence all theorems and rules we know for real integration flow directly to this case.

Contour integrals is basically the integration of the form,

Where z0 and z1 are complex numbers. We immediately see a difficulty. Unlike the case of an interval [a, b] where it is obvious how to go from a to b, here we have points in the complex plane and there are infinitely many ways to go from one point to the other since the complex plane is a 2-dimensional plane. Therefore, the above integral is ambiguous. To do this integration, we have to define a path from zo to z1. This is similar to line integrals of vector functions in 3-dimensional space, where we need a specific parameterized path to compute the integral.

Let Γ be a smooth parametrized curve joining z0 to z1, and let f(z) be a complex-valued function that is continuous on Γ. Then we define the integral of f along Γ by,

The complex integral also satisfies some properties like linearity and change of sign when integrated into the reverse direction. The proofs of these properties are easy and can be easily done by using the definition.

Note that the result is independent of R.

After doing integration by parts, we finally get 2πi.

Result 1: Take f(z) = 1, then according to the above definition,

Result 3: Estimating the maximum value of a contour integral.

If Γ1 is a smooth curve joining z0 to z1 and Γ2 is another smooth curve joining z1 to z2, then we can make a curve Γ, not necessarily smooth, by joining z0 to z2 by first going to the intermediate point z1 via Γ1 and then from there via Γ2 to our destination z2. The resulting curve Γ is still continuous, but it may not be smooth, since the velocity need not be continuous at the intermediate point z1. Such curves can be called piecewise smooth or contours, as popularly called in the literature. We can, thus, construct curves that are not smooth but which can be made out of a finite number of smooth curves, called smooth components. 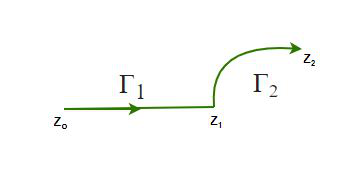 Example 1: Find the upper bound of the integral I = 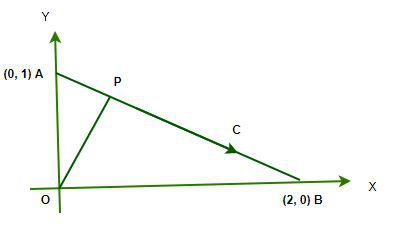 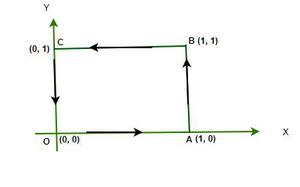 In vector calculus, the line integral becomes independent of the path in some special cases. This happens when the vector function can be expressed as the gradient of a scalar function. Similar is the notion of independence of path in complex integration. If we have a function whose anti-derivative exists in a region, we can say that the integral of the function will be independent of the path of integration. A domain is a subset (or a region) of a complex plane, in which every pair of points can be connected via a contour (or a piecewise-smooth curve).

Let D be a domain and let f: D → C be a continuous complex-valued function defined on D. We say that f has an antiderivative in D if there exists some function F: D → C such that,

For a more general contour, we can segment the whole contour into individual smooth components {Γj} for j = 1, 2, . . . , n. Then, we can readily see that the end points of each smooth component cancel out, leaving behind the start and end points.

My Personal Notes arrow_drop_up
Previous
Functions in Discrete Mathematics
Next
Cliques in Graph
Recommended Articles
Page :
SciPy - Integration of a Differential Equation for Curve Fit
18, May 20
Program to calculate Double Integration
20, Mar 19
Program to find the indefinite Integration of the given Polynomial
29, May 20
Introduction to Complex Analysis
03, Mar 22
Analyticity of Common Complex Functions
17, Mar 22
What is Peterson Graph?
10, Sep 22
Applications of Group Theory
10, Sep 22
If two equations x2+ax+b = 0 and x2+cx+d = 0, have a common root, then what is the value of that root?
17, Aug 22
If a and b are the roots of the equation x2 + bx + a = 0, and a, b ≠ 0, then find the values of a and b
16, Aug 22
Convert Cubic Yards to Cubic Feet (yd³ to ft³)
16, Aug 22
Regular Hexagonal Pyramid Formula
30, Jul 22
Cliques in Graph
17, Jul 22
Article Contributed By :